Click a button below to learn more about options and enhancements available for our VIBROSCREEN Circular Vibratory Screeners & Separators.

All VIBROSCREEN® circular vibratory screeners from 18 to 100 in. (460 to 2540 mm) in diameter are available designed, constructed and finished to industrial, food, dairy and pharmaceutical standards including FDA, 3-A, USDA, BISSC and others. Sanitary screeners generally incorporate rounded corners, continuous ground and polished welds, domed lids, quick-release "U" clamps, and 4-post open bases with stainless steel motor enclosures allowing thorough wash down of the underside and plant floor

Sanitary screeners generally offer one or more of the following features: 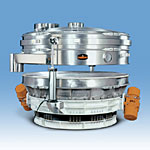 Kason's Air-Lift quick screen change system for circular vibratory screeners allows operators to change screens and gain access to the interior of the unit for cleaning or inspection many times faster than possible using comparable systems.

The lightweight device consists of two vertically mounted air cylinders that are located on opposing sides of any circular separator and affixed to mounting brackets on the lower and upper screening frames.

To operate, a quick-disconnect clamp connecting the frames is removed and a remote air valve is actuated, raising the upper frame. The procedure is reversed to reconnect the frames.

One entire raise/lower cycle including quick-disconnect/connect of the frames, requires only several minutes, reducing downtime during every inspection, cleaning and screen-changing operation. In addition, one operator can now perform what was previously a two-person task, depending on screen diameter.

Other safety features include a safety lock-out that locks the frames in the open or closed position when the upper screener housing is raised or lowered, and safety bars that prevent the housing from accidentally descending while in a fully-raised position during screen changes or wash down.

The Air-Lift device is available on any new Kason screener, and can be retrofit to any circular vibratory screener of any make or model from 48" to 84" (1220mm to 2135mm) in diameter, including screeners having single- or multiple-decks, and screens with or without center holes and/or anti-blinding devices. 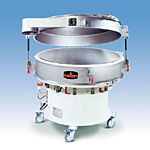 All Vibroscreen® separators from 30" to 84" (760mm to 2135mm) diameters in both single- and multi-deck configurations are available with Kason's exclusive "clamshell" option.

The hinged lid and/or frames are released via quick-disconnect clamps and held in an open position by gas pistons, allowing rapid screen changes and easy, thorough washdown of all interior surfaces.

The Kason Quick Screen Change Assembly is the only deck-opening device offering all of the above capabilities. 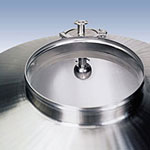 Vibroscreen® vibratory screeners designed, constructed and finished to Clean-In-Place (CIP) specifications employ spray nozzles that are strategically placed to emit cleaning solutions, rinsing solutions and/or steam for sanitizing the interior of the screening chamber(s) without the need to open or otherwise disassemble the unit.

Quick-disconnect clamps allow two-minute disassembly of all water supply hoses, clean-in-place spray head fittings, and screener body sections for inspection or screen changes. Unlike traditional circular vibratory screeners, CIP screener frames and screens are designed to eliminate the gap that normally exists between the mounted screen and the frame wall.

CIP screeners are offered in diameters from 18 to 60" (460 to 1525mm) in all-stainless construction finished to FDA as well as 3-A, BISSC and other sanitary standards. 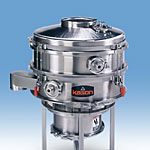 Quick-disconnect clamps allow two-minute disassembly of all water supply hoses, clean-in-place spray head fittings, and separator body sections for inspection or screen changes. Unlike traditional circular screen separators, this sifter has no gaps between the mounted screen and the frame wall.

It is offered in diameters from 18 to 60" (460 to 1525mm) in all-stainless construction finished to FDA as well as 3-A, BISSC and other sanitary standards. 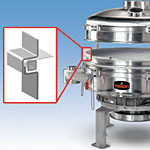 This Kason innovation features an interlocking flange between screen frames that protrudes from the external side of the frame to fully envelop the circular support ring of the internal screens. This enables the mesh of the screen to fully extend to the walls of the frame, eliminating the gap between the screen ring and frame wall of conventional screeners where material typically collects.

The gap-free design dramatically reduces the possibility of contamination due to bacteria growth, while improving sanitizing efficiency, making it suitable for pharmaceutical, food and dairy applications as well as chemical applications where cross-contamination is a concern.

Screens are mounted to support rings using FDA-approved epoxy and sealed using FDA-approved gasket material. The wire mesh screening material is offered in 304, 316 and "magnetic" 400-series stainless steel that, if broken, can be captured by a downstream magnet.

The E-Z FORCE weight adjustment system allows precise control of material flow patterns. The high torque, high-efficiency, imbalanced weight gyratory motor, which is rigidly mounted to the screening assembly, has a double extension shaft fitted at each end with variable eccentric weights. Weights can be adjusted in several minutes by one operator, allowing maximum efficiency for each screening application. 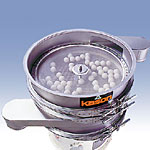 The Kason Ball Tray Anti-Blinding Device utilizes the multi-plane inertial vibration of the screener and bouncing elastomeric balls to prevent screen blinding. The device consists of two screens spaced sufficiently apart to allow captive elastomeric balls to bounce between the upper "operating" screen and the lower coarse-mesh "ball screen" for the purpose of dislodging near-size, dry materials lodged in the apertures of the upper screen. 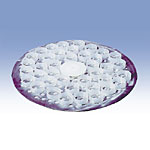 Kason Kleen-Screen Rings are effective at preventing fibrous, stringy and sticky materials from blinding the screen. Multi-plane inertial vibration of the screener causes plastic rings to move continuously across a perforated stainless steel plate, shearing fibers and scraping away gummy materials. Because they are hollow, the rings promote product flow over the entire screen surface, maximizing screening efficiency. 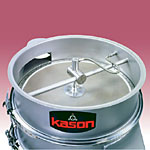 The patented Kasonic® anti-blinding device allows sifting as fine as 25 microns (500 mesh) on any circular vibratory screener of 18" to 100" (460mm to 2540 mm) diameter. It transmits ultrasonic frequencies (adjustable) to the screen, adjusting power automatically according to screen loads. It operates with standard screens, reducing cost, and is supported independent of the screen, prolonging screen life. 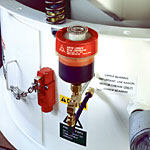 The imbalanced weights in gyratory screener motors subject bearings to extreme loads, with inadequate or improper lubrication resulting in rapid bearing wear—the major cause of gyratory motor failure. Kason's Auto-Lube automatic lubrication system is designed to eliminate this problem by pressure feeding lubricant into motor bearings for 6 to 12 months between reservoir replacements.

Continuous lubricant flow flushes the race of wear materials, broken down lubricant and contaminants, and minimizes dead spots where up to 95 percent of the lubricant would otherwise remain unused. Optional on Vibroscreen separators in 48" (1220mm) and larger diameters. Can be retrofit in one hour to any circular vibratory screener. 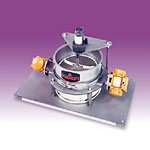 The wiper blade assembly prevents screen blinding and boosters capacity by breaking down lumps and agglomerates. The independently mounted assembly allows adjustment of wiper blade height above or at the screen surface, and adjustment of blade speed from 1 to 15 RPM. Rubber wiper blades or bristle brushes can be affixed to agitator shaft arms. 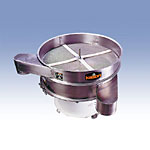 The Four Finger Flex Wiper anti-blinding device employs four radial arms of durable neoprene to prevent screen blinding of the operating screen by slimes, pitch and other soft, gummy materials. Multi-plane inertial vibration of the screener causes the wipers to rotate continuously, enhancing the flow of material through apertures of the screen. Specially designed units are available for exceptionally difficult-to-screen products. 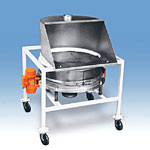 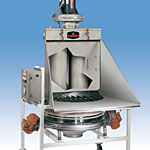 Kason gravity-fed and pneumatic in-line screeners in 24", 30" and 40" (610, 760 and 1015mm) diameters are available configured as basic Bag Dump Stations (top), or Bag Dump Stations with Dust Collectors (bottom) that protect the operator and plant environment against dust contamination during manual dumping operations.

Ambient air and dust from dumping activities is drawn onto the exterior of two cartridge filters that derive vacuum from a top-mounted exhaust fan.

Dust accumulated on the filters' exterior surfaces is dislodged by overcoming continuous negative pressure within the cartridge filters, with positive pressure introduced in short blasts on a timed cycle by pulse jet nozzles.

Dislodged material falls into the screener while instant resumption of negative pressure collects any dust generated by the filter cleansing operation.

To afford a sufficiently low deck height for manual dumping—and provide space below the screener outlet for connection to mechanical or pneumatic conveyors, process equipment or storage vessels—bag dump stations are normally specified in combination with Kason's Flo-Thru low-profile screener.

Screeners configured for bag dumping with or without dust collection are available to industrial, food, dairy and pharmaceutical standards including 3-A, FDA and BISSC. 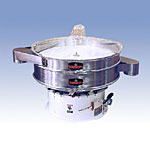 "KASCADE" Internal Recycle Screening Decks operate in conjunction with conventional screening decks to increase the capacity of new or existing circular vibratory screeners by 60 to 160 percent.

Available new or as retrofit kits, KASCADE screening decks are generally specified for new applications where space is restricted since diameters are significantly smaller than those of conventional screeners having equivalent capacity, or for retrofit applications to increase capacity and efficiency (minimized "carry-over" and ejection of on-size material) at substantially lower cost than purchasing new equipment.

Kason offers KASCADE screening decks in one-, two-, or three-deck configurations (single-deck shown), in diameters from 40" to 100" (1025mm to 2550mm) to scalp, dedust, and/or classify up to 91 metric tons/h of free-flowing bulk material.

Available to 3-A, USDA, FDA, BISSC and other sanitary standards, KASCADE screening decks can be disassembled rapidly for thorough wash-down.

At Kason Corporation, we manufacture the highest quality aftermarket screens and parts at highly competitive prices.

Our replacement vibratory round screens are manufactured in the United States, United Kingdom, Canada, and Australia, all of which can be delivered quickly anywhere in the world. Contact one of our friendly team members today for a free quote or to discuss your requirements in more detail.

Ask Us a Question