SASKATOON, SASKATCHEWAN, CANADA —The largest city in Saskatchewan turned a problem of excess phosphorus accumulating in its wastewater treatment system into a slow-release, environmentally-friendly fertilizer.

The Ostara Pearl® 2000 reactor system operating at the City of Saskatoon Wastewater Treatment Plant transforms excess phosphorus and nitrogen from the wastewater into fertilizer pellets. In the final steps of the process, a Kason single deck circular vibratory screener dewaters the pellets, and a four-deck Kason classifier separates the final dried pellets into five commercial sizes sold as Crystal Green® fertilizer.

Saskatoon's wastewater treatment plant, built in 1971, has expanded several times to serve the city's growing population of over 300,000, and comply with environmental regulations. In 1991, an enhanced biological phosphorus removal (EBPR) process was installed to reduce phosphorus to meet discharge permit limits for the South Saskatchewan River.

In the EBPR process, microbes known as phosphorus accumulating organisms (PAOs) remove phosphorus from the incoming waste water stream of 22.4 million gal (85 million l) per day. The resulting biomass is piped 7.4 mi (12 km) to settling lagoons where it is aerobically digested and dewatered. The resulting biosolids from the lagoons are applied to farmland, and the supernatant liquid is pumped back through a second 7.4 mi. (12 km) pipeline to the wastewater plant inflow.

Although EBPR has many advantages over chemical phosphorus removal, the accumulating sludge was releasing phosphorus back into solution, resulting in greater loads of phosphorus and other nutrients (i.e., ammonia and magnesium) circling back to the main treatment process. The nutrient overload promoted formation of a precipitate called struvite (magnesium ammonium phosphate hexahydrate, MgNH4PO46H2O) that was coating pipes, valves and other equipment, reducing plant flow capacities and increasing maintenance requirements. "Struvite formation was challenging operational reliability and reducing process efficiency in the sludge treatment stream, impacting digesters, dewatering, and associated biosolids infrastructure," says Derek Lycke, Ostara Director of Engineering.

To eliminate these problems, the City of Saskatoon commissioned Ostara Nutrient Recovery Technologies Inc. to install Canada's first commercial facility to recover phosphorus and nitrogen, and transform them into more than 80 tons (725 M.T.) per year of a slow-release, environmentally responsible, enhanced-efficiency fertilizer called Crystal Green®.

The heart of the nutrient recovery process is Ostara's Pearl® 2000 fluidized bed reactor into which the nitrogen (i.e. ammonia) and phosphorus-rich sludge water is fed. Magnesium chloride is separately added.

Additional phosphorus and magnesium are fed to the reactor by Ostara's Waste Activated Sludge Stripping (WASSTRIP®) process which strips both nutrients from the sludge. The stripping makes available as much as 40 percent more phosphorus for recovery and further controls struvite scale formation throughout the sludge treatment stream.

The Pearl reactor removes 90% of phosphorus and 40% of nitrogen from its feed water, and converts them into the high-value fertilizer. Microscopic crystals of struvite (each crystal containing both nitrogen and phosphorus) begin to form in the reactor, like a pearl, and grow until they reach desired particle size of 0.039 to 0.138 in (1.0 to 3.5 mm ) diameter for the fertilizer product.

Says Derek Lycke, "The result is struvite in the form of extremely pure, crystalline pellets (prills). They are batch harvested from the reactor in a slurry consisting of approximately 10 percent solids by weight at a rate of 2.2 to 3.3 lb/min (1.0 to 1.5 kg/min).

In operation, an imbalanced-weight gyratory motor imparts multi-plane inertial vibration to the screen deck, causing solid particles to migrate across the 35 mesh (445 mm, 0.0176 in.) screen and exit through the upper discharge spout. The liquid flows through the screen apertures, exiting through the lower discharge spout, and returning to the head end of the treatment process. The particles smaller than 35 mesh are captured.

Because the solids tend to agglomerate, a Kleen Screen ring anti-blinding device is fitted atop the screen. The device consists of plastic rings that move continuously, by the screener's vibration, across a perforated stainless steel plate having apertures slightly larger than those of the screen beneath. The motion of the rings across the steel plate shears and scrapes the clumping particles so they can pass through the screen. Because the rings are hollow, they promote product flow over the entire screen surface, maximizing screening efficiency.

The screened and dewatered particles pass to the horizontal fluid bed dryer, which further reduces their moisture content to 0.5 percent. Using heat, air flow and vibration, the unit separates and fluidizes individual particles to maximize drying.

Each screening deck is fitted with the same Kleen Screen anti-blinding rings as the dewatering screener. The classifier separates the pellets based on the same multi-plane inertial vibration principle as the single-deck screener.

Ostara claims that Crystal Green fertilizer is the first to provide slow release of plant-available phosphorus, nitrogen and magnesium in one citrate-soluble product. Releasing these nutrients slowly over 160 to 200 days promotes plant health while reducing the risk of leaching and runoff.

The City of Saskatoon receives a share of the revenue generated from fertilizer sales, which helps offset the costs of the system. "The process not only helps us to dispose of an otherwise troublesome byproduct, but also creates a new revenue stream for the city," says Saskatoon's mayor. "It really is a win-win situation." 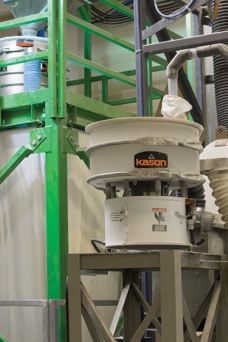 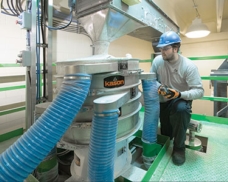 Each screening deck of the classifier and dewatering screener is fitted with a Kleen Screen anti-blinding device. The motion of rings sliding across and atop of the perforated steel plate shears and scrapes clumping particles so they can pass through the screen.

Crystal Green® slow-release, enhanced-efficiency fertilizer is the end product of Ostara Nutrient Recovery Technologies' process which recovers and transforms phosphorus and nitrogen from the City of Saskatoon's wastewater treatment plant.