Kason Corporation, located in Millburn, NJ, manufactures a variety of separators for screening and classifying bulk materials, including chemicals, foods, minerals, and grains. Since 1970, the company has operated a test center to help its customers choose the right separator and options for their application.

In late October 1988, Dale Knepp, vice president and plant manager for American Brass, Headland, Alabama, saw an ad in a trade magazine for Kason's VIBROSCREEN vibrating circular screener. American Brass recycles scrap brass into ingots, which are sold to manufacturers of plumbing fixtures and other hardware.

To make the ingots, the scrap brass is loaded into rotary furnaces and melted down. Borax is added to the molten brass, causing impurities to rise to the surface and form a slag that's skimmed off and cooled. The process generates about 40,000 pounds of slag per day.

When slag hardens, it traps small beads of pure brass, valued at approximately $.50 per pound. American Brass wanted to recover this brass by crushing the slag and separating the dust from the larger, brass-laden chunks. The company already had the necessary size reduction equipment, but needed a screener. Limited space and housekeeping concerns dictated that the new screener be compact and dust-tight.

Knepp thought the VIBROSCREEN might meet the plant's needs, so he called Kason and arranged a screening test. Henry Alamzad, then Kason's test center engineer, asked Knepp to send two 55-gallon drums (about 300 pounds) of slag to the test center, along with a Material Safety Data Sheet (MSDS). Knepp then arranged to visit the test center to witness the screening tests.

When the test center received the slag, Alamzad analyzed its angle of repose, bulk density, particle size distribution, and particle shape to prepare for the test session.

The tests were performed just 2 weeks after the initial contact. "It would've been sooner," says Knepp, "but Kason had to wait for me to find time to get there." For the tests, a screw feeder discharged slag into a 24 in. diameter vibrating circular screener fitted with a 20-mesh screen.

After the first separation test, Alamzad analyzed the particle size distribution of the overs and the fines and found that too much dust was being discharged with the overs. To remedy this, he replaced the 20-mesh screen with an 18-mesh screen. Further tests showed that this produced a cleaner separation.

Tests also showed that the screener operated more efficiently when a 10-mesh screen was placed above the 18-mesh screen. This reduced the load on the 18mesh screen and increased the available screening area.

After making these changes, Alamzad ran several more back-to-back tests to simulate production conditions and generate additional data. A total of eight test runs were made with good results.

The entire test procedure took 3 hours. "I was very impressed with the efficiency of the test center and with the way the vibrating circular screener worked," says Knepp. "After seeing the test results, I saw no reason to look any further — the screener did exactly what we needed it to do." In December, American Brass purchased and installed a double-deck, 72 in. vibrating circular screener with 10-mesh and 18-mesh stainless steel screens.

The new screener handles as much as 12,000 pounds of slag per hour, with an average throughput of 40,000 pounds per day. Reducing and screening the slag allows American Brass to recover from 35,000 to 45,000 pounds of brass per month.

Kason's test center is located at the company's plant in Millburn, NJ, about 15 minutes from Newark International Airport. The test center occupies 1,250 square feet and has two staff members. Besides helping customers choose the most effective separation equipment, Kason engineers use the center to test new equipment.

The center staff conducts separating tests with several types of equipment, including three lab-size VIBROSCREEN vibrating circular screeners with different frames. Each can make up to five separations with mesh sizes ranging from 45 microns to 2 inches. The screeners also handle wet materials, including wastewater. For screening difficult-to-handle materials, a variety of anti-blinding devices can also be tested, including top-side wipers, rings, and ball trays.

The test center also has two CENTRI-SIFTER centrifugal sifters for sifting dry powders and granular materials, especially those that are likely to blind conventional screens. One sifter has a self-purging trash trap that continuously expels trash and oversize material without interruptions for cleaning. Occasionally, the center staff tests a material in both a vibrating circular screener and a centrifugal sifter to see which will give the best results.

The test center also has a Blo-Thru circular screen separator for sifting and scalping tests in dilute-phase pneumatic conveying systems. This unit accepts screens with openings ranging from 50-mesh to 2 inches and can be equipped with several anti-blinding devices.

Most tests require a 55-gallon drum of material. Material Safety Data Sheets (MSDSs) are also required, and the staff won't work with hazardous or explosive materials. Testing is free, except for material shipping charges. Test results and recommendations can often be furnished in 48 hours or less.

For centrifugal sifter tests, the report includes the type and mesh size of the screen, the rotor speed, and whether an end-baffle plate or screen brushes were used.

The center staff also maintains a materials library. If you send in a sample that's the same as one on hand, test results and recommendations can be quickly sent to you. Just some of the library materials include polyethylene, phenolic resin, rubber, sugar, flour, glass bead, lead oxide, cat litter, and wood chips. 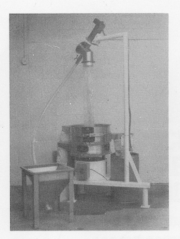 This 24 in. vibrating circular screener was used to separate slag dust from brass-laden slag chucks in tests for a brass recycler.

The Kason test center is also equipped with this Blo-Thru vibrating sifter for sifting and scalping tests in dilute-phase pneumatic conveying systems.