JESSUP, MD—The Class Produce Group sells fresh-cut produce prepared by its subsidiary TGD Cuts to stores, restaurants, the military, schools and other foodservice customers. The firm distributes throughout the eastern half of the U.S., from Maine to Florida and west to the Mississippi River.

Requisite washing of these fruits and vegetables generates an average of  28,000 gal (105,980 l) per day of wastewater containing total suspended solids (TSS), which were causing problems for the company and the municipality.

Produce debris has to be filtered

Peelings, seeds and debris comprising the bulk of the TSS, clogged pumping systems at the TGD facility and burdened the filtration systems at the Howard County, MD municipal wastewater treatment plant, requiring a solution.

“Howard County has a 20-plus year old infrastructure that is trying to keep up with growth,” says Vic Sainato, lead refrigeration technician at TGD Cuts. “They told us we had to reduce the solids being piped to the treatment plant.”

To solve the problem, TGD installed a CROSS-FLO Dewatering Sieve that continuously removes solids via an inclined screening deck fitted with a stainless steel profile wire screen. Slots in the screen are oriented perpendicular to the direction of wastewater flow, which accelerates the flow rate of water through the screen in accordance with the “Coanda effect,” a principle of physics in which fluid remains in contact with a convex surface, increasing its rate of passage through the screen.

Manufactured by Kason Corporation, the sieve is a single-deck model measuring 48 in. (1219 mm) in width and 54 in. (1372 mm) in length. The incline of the screen deck can be field adjusted to optimize performance.

Important to TGD Cuts is that no motor or labor is required. “The liquid merely flows over and through the profile wire screen, as solids fall naturally from the screen into the hopper,” says Sainato.

TGD’s plant is situated some 20 ft (6 m) downhill from the wastewater main that leads to the municipal treatment facility. Before introducing the Cross-Flo Sieve, the pumps were pushing the TSS-laden wastewater upward, often becoming clogged in the process. Shutting down to clear the pumps cost up to $10,000 per incident in materials, lost time, and labor costs.

The elevation meant TGD had to construct a raised system (20 ft [6 m] high) within the plant for the Cross-Flo Sieve, requiring permitting from the municipality. “The system involved piping, tanks, and plumbing to and from the sieve to the water treatment plant,” says Sainato. “We had to prove to the county that this would work.”

Installation a win for processor, municipality, and local farmer

The system was constructed in two months, and put into operation in May 2018.

Howard County is in the busy Baltimore-Washington DC corridor where growth is straining its aging infrastructure.  The county’s 2017 estimated population of 321,000 is up 30% from 2000. Businesses and residents are asked to reduce their TSS output. The county’s website, LiveGreenHoward.com, urges residents to compost their vegetable waste instead of sending foods through garbage disposals.

A county representative helped Sainato identify the dewatering sieve by way of a colleague who faced a similar problem at neighboring industrial plant. “I hauled 10 five gallon pails of our wastewater in a pickup truck to the Kason laboratory in New Jersey,” says Sainato. “We could see it worked right away.”

In addition to easing the burden on Howard County’s WTP, removing total suspended solids from the waste stream produces a steady supply of hog feed which is picked-up daily by a local farmer.

CROSS-FLO Sieve removes solids from 28,000 gal (106,000 l) per day of TGD Cuts’ wastewater before it enters the municipal wastewater system.

Wastewater flows over an inclined screening deck that captures peelings, stems, foreign objects and debris as small as seeds. 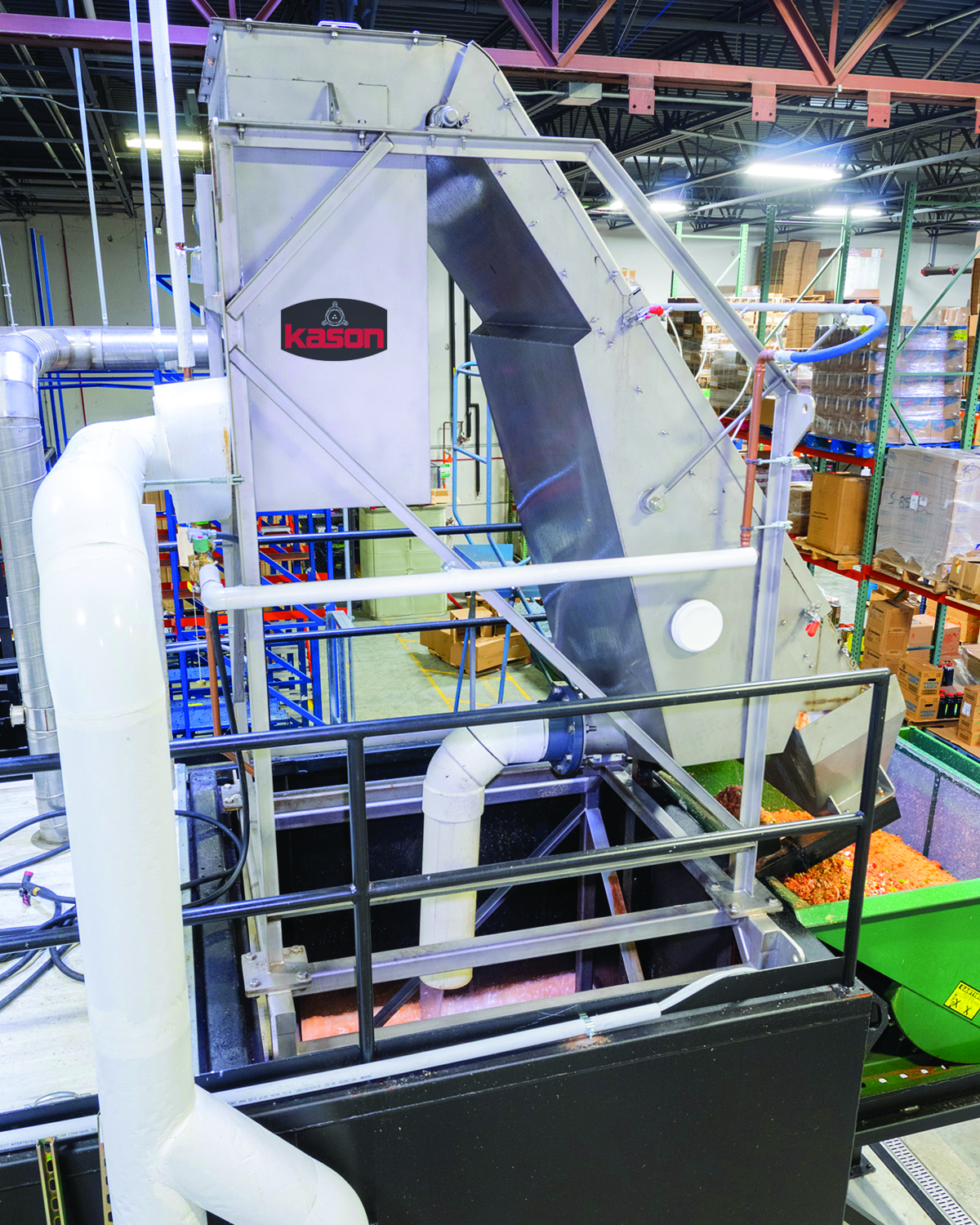 Wastewater is pumped onto the dewatering sieve, which separates solids at high rates without the use of power.

TGD Cuts’ organic waste is utilized by a local farmer as animal feed.

Screened wastewater is pumped to the municipal wastewater plant in compliance with accepted levels of total suspended solids.