Growing demand for plastic pellets by local molders led a supplier to produce its own finished pellets from resin supplied in intermediate form. The suppler installed a new line to produce the pellets, which then needed to be screened of any lumps, strands, strings, or fragments that may have formed during processing.

To judge whether Kason VIBROSCREEN® vibratory circular screen separators would meet the requirements, management visited a plant at which the units were classifying plastic regrind (a tougher task than screening clusters and fines from plastic pellets). Soon, two new 60" diameter VIBROSCREEN separators were cleaning the finished pellets.

As production grew, the supplier decided to pre-screen incoming intermediate plastic resin as received form the trucks and rail cars. 72" VIBROSCREEN High Capacity Classifiers would fit the tight space here, but needed to scalp and dedust adequately at a transfer rate of approximately 25 ton/hour.

Kason engineers had determined that 72" VIBROSCREEN High Capacity Classifiers boosted capacity beyond the 9-1/2 ton/hour choke of standard 72" VIBROSCREEN units. The high capacity unit replaces the frame containing the discharge spout with a smaller diameter screen that allows the screened material to cascade over the screen's periphery and drop freely onto a funneled pan having a large discharge spout.

This innovation averted choking at the discharge spout and consequent screen breakage, spring failures and spout cracking. It raised capacity to 25 ton/hour with the same dedust efficiency, power, footprint, and airtight 72" envelope.

The units demonstrated how the plant might avert a new bottleneck in the original finished pellet screeners as demand now rose well above the original production rate.

Instead of installing new screeners, Kason believed it could increase capacity of the existing 60" VIBROSCREEN units by retrofitting them with Kascade screening decks.

Retrofit time was limited to a one weekend plant maintenance break, and by 12:10 am Monday, Kason turned the first unit over to the night shift delivering 150 percent higher output. During the night, the workers boosted throughput another 50 percent and still maintained quality.

Kason later added a ball-deck to prevent blinding, because damp or dry weather caused fines to cling. (These were also the first high capacity units made with a 2"high internal frame [on struts to the 72" wall], making it easy to disassemble the screen, ball-deck and fines-chute independently using quick-disconnect clamps.) All units are still running well.

The manufacturer is now considering retrofitting the balance of its VIBROSCREEN separators. 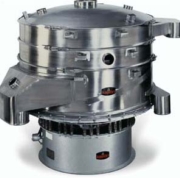