A 48 in. (1220 mm) diameter Circular Fluid Bed Dryer equipped with an integral circular vibratory screener quadrupled production of a proprietary granular chemical product, and improved quality by increasing the consistency of drying times.

A 48 in. (1220 mm) diameter VIBRO-BED Circular Fluid Bed Dryer reduces moisture content of the converted material to less than 1.0 percent at 120° F (49 °C), after which it is discharged into an integral 48 in. (1220 mm) diameter, two-deck VIBROSCREEN separator that removes (oversize) agglomerates and (undersize) fines, and discharges into storage containers at a rate of 2000 lb/h (907 kg/h).

"We were impressed with the circulating unit's small footprint, fluidizing action, speed of drying, and modularity—you can move it without difficulty. We also had operating experience and a comfort level with circular vibratory screeners that look and function similar to a circular fluidized bed dryer," he says.
Circular Fluid Bed Dryer/Screener Operation

Converted material from storage containers is fed into the top inlet of the dryer by a bucket elevator. In the fluid bed chamber, the material vibrates on a circular screen within a rising column of 120° F (49 °C) air created by an upstream heater/blower ducted into the bottom of the chamber. The continuous air-flow, and vibration induced by two vibratory motors and spring suspension, separate and fluidize individual particles, maximizing surface area and drying efficiency. The vibratory action also causes material to travel from the center of the screen to a discharge spout at the screen's periphery in controlled spiral pathways on a first-in-first-out basis, ultimately discharging dried material into the top-center inlet of the circular vibratory screener.

An imbalanced-weight gyratory motor positioned beneath the chamber of the screener vibrates two screening decks. Oversize particles travel in controlled spiral pathways from the center of the screen to a spout at the screen's periphery where they are discharged for reprocessing.

On-size and undersized particles pass rapidly through the top screen to a bowl-shaped feed tray that directs them to the center of the second screen. On-size particles travel in controlled spiral pathways to a spout at the screen's periphery where they are discharged, while undersize material passes through the screen onto an integral metal chute that discharges it through a third spout for reprocessing.

Since the drying-screening portion of the overall process operates off-line, it can also be utilized to dry raw materials containing excess moisture, or dry other bulk products manufactured by the company. In anticipation of wide-ranging drying applications, the system was engineered to operate at temperatures higher than that required to dry the proprietary chemical.

According to the Engineering Manager, operators previously moved back and forth between tasks while waiting for product to dry, and were unable to focus adequate attention to either task, raising the chance for error. "Operators are now fully utilized in producing and drying the product, with significantly less error," he says, and reports that the drying-screening system paid for itself in less than six months from combined productivity gains and labor savings. 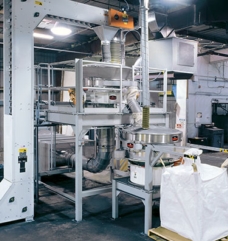