Boise, Idaho—8 Feathers Distillery, founded in 2004, produces premium whiskeys from locally sourced grains, and water from a nearby artesian well.

The company disposes of its grain slurry waste sustainably and economically by separating the grain from water using a centrifugal sifter. The grain is donated to a local farmer as livestock feed, while the water is treated before being safely piped into the public wastewater system.

A local farmer previously picked up eight 300 gal (1136 liter) totes per week of the watery grain mixture, but at 940 lb (423 kg), the totes were difficult to transport, and required covers to prevent spillage. "This wet approach would not scale for higher production," Lowe explains, so the grain needed to be separated from the water. To complicate matters, any water piped to the municipal wastewater treatment system needed to be free of solids content and have a pH in an acceptable range.

The stillage produced by some distilleries contains grain that remains intact, and can therefore be separated from water using a settling and rinsing process called ""lautering." However, the fine grain particles resulting from the grinding process employed by 8 Feathers precludes lautering as a means of separation.

Also ruled out was flocculation, which causes particles to clump using chemical additions that would render the dewatered grain unsafe as animal feed.

"The filter press offered excellent performance but the cost of the press, air diaphragm pumps to fill the press, and a compressor to run the pumps put the total cost at more than double that of a screw press or centrifugal separator," Lowe says. "Further, without adding some form of chemical solids coagulator into the flow, the filter cloths would require extensive cleaning after each use. Chemical use would also contaminate the recovered grains sent for feed and raise the cost of continuous operation to an unacceptable level."

"We also considered screw presses, but smaller units that fit our budget and footprint were unavailable."

"This narrowed our choices to mechanical sifter-type separators. Kason Corporation manufactures both circular vibratory and centrifugal screeners, so we provided the company with a 10 gal (38 l) sample of stillage for testing on both machine types in its laboratory."

The circular vibratory unit proved unable to handle the 50 gal/min (189 l/min) infeed rate required to handle the stillage pump capacity, but the centrifugal screener handled the flow rate with capacity to spare.

Lowe says, "The results were as good as or better than anticipated. The sifter processed a 1500 gal (5678 l) test sample with 40 percent solids, fed at 40 gal/min (151 l/min) without any degradation of performance. The separated grain was at an acceptable level of dryness for transport. After the test run, the unit was opened to inspect the screen for evidence of blinding and none was found."

The water/grain mixture is fed by a lobe pump into the inlet at the upstream end of the centrifugal sifter, where a screw feeds the mixture into the open end of a horizontal screen cylinder. Rotating helical paddles propel the water/grain mixture against the screen, accelerating the passage of water through the screen and against the wall of the chamber which funnels the water by gravity through a 10 in. (254 mm) outlet into a 2000 gal (7570 l) polyethylene vat below. It is further treated with soda ash to adjust pH before finally flowing into the public wastewater system.

Grain solids unable to pass through screen apertures are propelled in a helical pattern through the screen cylinder until being discharged through its open end, into a chute that funnels the dewatered solids into a plastic tote on a pallet below. When a tote is full with about 2,500 lb (1,136 kg) of the damp grain, a pallet truck replaces it with an empty tote. The full totes are stored in a holding area to be picked-up by a farmer.

The centrifugal sifter's end housing can be opened, allowing tool-free removal of the screen cylinder and paddle assembly from the cantilevered shaft for cleaning. However, operators simply backwash the sifter with water as it runs, cleaning the pipes and the screens at the same time. "It takes two or three minutes and has worked well, eliminating the need to climb a ladder and physically access the machine," notes Lowe. He says no maintenance has been required, or reliability issues encountered. "We have not opened the door on that thing in six months," he says. 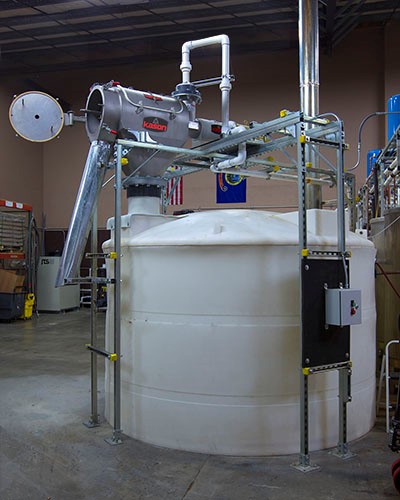 The CENTRI-SIFTER centrifugal sifter separates about 7500 lb (3409 kg) per week of fine grain particles from 8 Feathers’ stillage. The dewatered solids pass through the chute in foreground. The water gravity-discharges into the 2000 gal (7570 l) vat below.

Opening the hinged end cover of the centrifugal separator allows the paddle assembly and screen cylinder to slide off the cantilevered shaft. 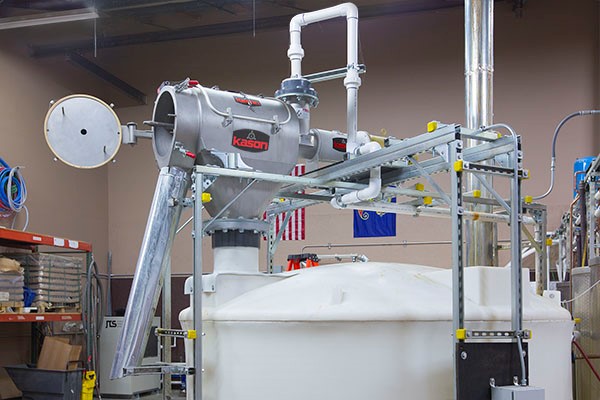