LANSDALE, PA—"We make sure our apples are spotless before we make them into cider," explained Dan Zeigler, principal of M.H. Zeigler & Sons Inc. Leaves, twigs and other debris arrive at Zeigler's cider production facility along with apples from neighboring and distant orchards.

"We carefully spray wash, brush and rinse the apples. This apple cleaning operation results in significant amounts of wastewater that requires separation of solids from water," according to Mr. Zeigler.

For years, Zeigler relied on motorized shaker screens to remove solids from wastewater. Their use proved troublesome because sometimes twigs would bridge across the discharge spout and then the process would slow tremendously. The offending twigs or other debris had to be removed to let the wastewater discharge.

After watching a dewatering sieve clean plastic pellets, Mr. Zeigler installed three of these Kason CROSS-FLO Motorless Sieves in his own plant. But unlike most sieves, which are free-standing and utilize valuable floor space, these Kason stainless steel units are suspended from the ceiling. Kason frequently modifies its products to meet unusual requirements.

Since installation six years ago, these Kason sieves have operated with very little maintenance. The headboxes are checked periodically and cleaned if needed. There are no motors to worry about as there are with the shaker screens.

After passing through the screens, the water flows to the sewer and is cleaned further by the public water authority. Leaves, twigs and any other debris are hauled out by trailer along with apple pulp and they are disposed of according.to environmental regulations.

The Kason CROSS-FLO units have an extended acceleration/orientation ramp at the upper portion of the unit that performs three functions. First, the elongated ramp develops the proper feed velocity to the profile wire deck, enhancing the "Coanda" effect and the dewatering capacity. Second, when handling fibrous material, it aligns the fibers in the direction of the flow before they reach the transverse slotted openings of the deck. This orientation of the fibers permits wider spacing to be used between the profile wires, as the length rather than the diameter of the fibers becomes the crucial sizing dimension. The wider spacing increases the open area and the capacity of the sieve deck.

Zeigler also uses a Kason VIBROSCREEN Circular Vibratory Separator to remove oversize particles and a portion of the sediment from the cider after it has passed through filter bags. A 60-in. (1530 mm) diameter unit meets current capacity demands and acts as a final quality control device.

After being diced, apples are squeezed in a cider press. The cider drains through filter bags and down onto pans and then to the stainless steel circular screen separator which is equipped with a fine mesh screen. After screening, the cider is chilled, packaged and crated for shipping to regional grocery stores. The 65-year-old company employs about 35 people to process apple cider, apple juice and lemonade. 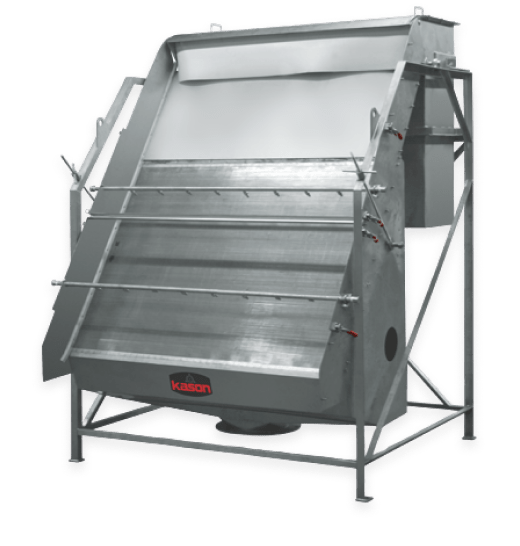 Instead of a free standing CROSS-FLO sieve such as the unit pictured above, M.H. Zeigler & Son uses one suspended from the ceiling.