BALLICO, CALIFORNIA—A Department of Agriculture (USDA) regulation introduced to eliminate rare cases of salmonella in raw almonds has prompted many California almond processors to install steam pasteurization equipment that achieves a four-log reduction of the bacteria (a 10,000-fold decrease). In most installations, the pasteurization equipment is oriented horizontally, but a top-10 (worldwide) almond producer here called Hilltop Ranch has taken a different, patent-pending approach in which almonds flow downward by gravity in a zig-zag pattern through a vertically oriented, 22 ft (6.7 m) pasteurization chamber. This enables steam to be utilized throughout the column more efficiently, reducing energy consumption, while treating all almond surfaces uniformly and reducing the equipment footprint by approximately 50 percent.

To further reduce energy consumption and floor space requirements, the company again broke with tradition and installed two circular, vibratory fluid bed processing systems, the first for drying, and the second for cooling, the pasteurized almonds.

"Although the original pasteurization process was designed to incorporate horizontal fluid bed processors, circular units from Kason caught our interest," recounts Charlie Jahn, Quality Manager for Hilltop. "We considered a few fluidized bed processors, and had some initial testing done with a conventional rectangular system. Most work well but they're twice as large, so they require extensive infrastructure and ancillary equipment, as well as energy-consuming levels of airflow," he says.

According to Jahn, a fluid bed processor had not previously been used for drying or cooling of almonds, so he specified the heat and moisture ranges required immediately after pasteurization, the cooling requirements after drying, the throughput requirement of 22,000 lbs/h (9,979 kg/h) of almonds, and other requirements. He then shipped raw almonds to the Kason laboratory in Millburn, NJ for both drying and cooling trials.

Dexter Long, Vice President, Operations at Hilltop explained, "We chose the Kason fluid beds based on test results for both drying and cooling, and because the company guaranteed those results if we could supply the minimum temperatures for drying and maximum temperatures for cooling operations. We like small footprints and vertical systems around here, so after the testing and one customer recommendation, we ordered the two circular vibratory fluid bed units. They were easy to install, easy to operate and clean, and they're working efficiently as guaranteed."

The circular fluid bed processor offers a higher strength-to-weight ratio than rectangular units of equivalent capacity, according to David Long, founder of Hilltop Ranch, and does not require heavy steel sidewalls or cross braces to withstand extensive vibration. Inherent strength of the circular unit also allows materials of construction to be down-gauged and gyratory motors to be downsized. The unit's small, circular footprint was also desirable to the company, which opted for an 84 in. (2125 mm) diameter model, the largest currently offered.

Immediately following steam pasteurization, the elevated moisture content of almonds must be returned to between 4.5 and 5.5 percent, because at only 6.8 percent moisture, the almonds would become too soft and have a shorter shelf-life.

To remove excess moisture, almonds exiting the vertical pasteurization chamber are metered by a rotary airlock valve into the circular fluid bed dryer, model K-84/100. Imbalanced weight gyratory motors cause the almonds to vibrate on a perforated plate within a rising column of heated (180 °F [82°C] minimum) air blown into the center of the fluid bed chamber from below by a 25 hp (18.6 kw) variable speed fan. Continuous air flow and vibration separate and fluidize individual almonds, maximizing the rate at which drying occurs. The vibratory motion also serves to convey the almonds in a controlled spiral pathway from the center to the periphery of the chamber on a first-in/first-out basis (dwell time approximately one minute) and to evacuate the chamber at the end of each cycle.

Heated almonds exit through a discharge spout at the periphery of the fluid bed dryer and are elevated 35 ft (10.7 m) by a drag conveyor to a Kason circular vibratory fluid bed cooler which differs from the dryer in only one respect: instead of a thermal fluid heater with blower to introduce warm air, it is equipped with a heat exchanger (plumbed to a plant chiller) and blower to force cool (65°F [18.3°C] maximum) air into the center of the fluid bed chamber from below, cooling the almonds to ambient temperature or less after a dwell time of approximately one minute.

To equalize the interior and exterior temperature variation of the almonds resulting from rapid cooling, they are gravity-fed into a vertical-cone equilibration tank in which ambient air is blown onto the almonds. The tank walls are inclined at 70 degrees to ensure that the almonds pass through on a first-in/first-out basis for uniform equilibrating.

"The equilibration step may be unique to Hilltop," says Jahn. "The almonds are mostly equilibrated after a minute in the Kason fluid bed cooler, but their interior temperature is marginally warmer than the exterior, so we added this 30-minute step. Our quality-control 'sweat-test' indicates that this step eliminates all residual moisture and condensation during packaging, a problem we know that other processors have experienced. The whole vertical pasteurization process takes a little over 30 minutes, with most of that time spent in the equilibration tank."

Vertically configured systems are nothing new at Hilltop Ranch. Shortly after founding the company in 1980 with his wife, Christine, founder David Long leveraged his engineering background to build what Hilltoppers call "Mount Satake"—their 65 ft (19.8 m) high almond initial sorting tower for separating almonds based on color and deformities. Long used the same vertical approach when he built a prototype almond pasteurizer in 2001, shortly after the industry's first salmonella incident, followed by the company's full-scale, 40 ft (12.2 m) high pasteurization tower engineered and manufactured in cooperation with Wilkey Sheet Metal in nearby Turlock, California.

After the industry's second salmonella incident in 2004, the Almond Board of California (ABC) together with the USDA, developed the new pasteurization mandate specifying the aforementioned four-log reduction minimum. Long was able to comply by merely increasing the amount of steam and heat and making other adjustments. Today Hilltop and Wilkey are partners in a pending patent for their refined vertical almond pasteurization system, which awaits validation testing for the four-log minimum by National Food Laboratories and approval by the ABC review committee.

Yet another example of Hilltop innovation is its use of a thermal fluid heating system by Fulton that uses isolated hot oil to generate steam, send hot air to the fluid bed dryer, and preheat the pasteurizing chamber. According to Long, the system is not only safer and more efficient than conventional boilers, but does not require a permit or a licensed boiler operator. The system is also said to prevent condensation inside the equipment while minimizing both water and energy requirements throughout the pasteurization process.

"We're always looking for efficient solutions at Hilltop," he says. "Our custom-designed processes, which are often vertically oriented, conserve floor space while yielding all kinds of operational efficiencies that help reduce costs and provide safe, high quality almonds at a good price, at a rate of over 50 million lbs (22.7 million kg [22.7 metric tons]) per year." 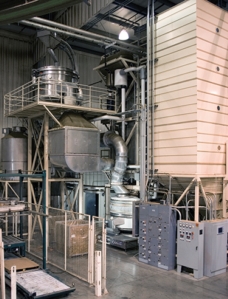 Almonds are conveyed from a holding tank (right) to a pasteurization tower (left of holding tank) from which they proceed to a fluid bed dryer (bottom) and then to a fluid bed cooler (top). Beneath the cooler is an equilibration tank where almonds achieve uniform temperature.

Almonds are hand sorted before entering the pasteurizer.

Bins of almonds that have been sized but not yet pasteurized, are stored in a 50 million lb (22.65 million kg) capacity warehouse.