According to the National Renewable Energy Laboratory (NREL) 4 billion lb (1.81 billion kg) of trap grease available in the U.S. each year could yield about 500 million gal (1.89 billion L) of biodiesel instead of ending up in municipal waste streams. The figures for oils and fats are similar.

B Green Group is capturing part of that potential by converting over 100 million gal (380 million L) of restaurant waste fats, cooking oil and trap grease annually into high purity feedstock which is refined by other firms into biodiesel, home heating oil, paint, animal feed and a diversity of other products.

With customized equipment and a proprietary process developed by founder and CEO Andre Bernard, the company converts the cooking waste at 17 regional plants it either owns or operates as joint ventures.

B Green's process extracts oils from the cooking waste while separating water and solids in steps that remove progressively smaller solids as the waste is converted to a liquid.

The company originally removed material in the 600 to 1550 micron range using a specially-built centrifugal sifter, which proved inefficient at dewatering thick slurries. In addition, screen baskets were difficult to change and replacement parts were costly.

The company replaced it with a Kason model "MO" Centri-Sifter™ centrifugal dewatering separator, which can be inclined up to 40° to increase the dwell time of material within the chamber, and accordingly, the drainage rate of free liquid.

Bernard specified a 10 hp (7.5 kw) motor—double that of his original unit—to avoid overloading when dewatering slurries comprised of fats, oils and greases. A woven wire material was selected for the screen baskets to handle heavy loads.

Cylindrical replacement screens that cost less than previously, together with the unit's quick-clean capability, further improved the economics of the process.

Cooking waste is gravity fed through a feed inlet and then metered into the cylindrical sifting chamber by a feed screw. With centrifugal force, rotating helical paddles, that never contact the screen, propel the waste against the screen. Liquids, and particles less than 600 micron, pass through screen apertures before gravity-discharging through the central housing outlet. Solids equal to or greater than 600 micron are ejected through the discharge spout at the downstream end of the cylinder.

To minimize downtime, the MO Quick-Clean model has a hinged door and cantilevered shaft at the discharge end, from which an operator can quickly remove the screen cylinder and paddle assembly for cleaning and inspection.

Following the centrifugal sifter, a 40 in. (102 cm) diameter, 4-deck Vibroscreen® circular vibratory classifying screener, also from Kason, removes progressively smaller suspended solids that remain in the liquid. Effluent from the process is treated and cleaned prior to disposal. Waste solids, also treated, are discarded or burned for energy.

B Green installed seven MO centrifugal separator at five of its newest plants. Bernard's plans call for opening 20 plants in coming years—three in 2015 alone—each of which will have two Centri-Sifter centrifugal sifters. He says he can easily sell ten times the amount of his current output of 2 million gal (7.5 million L) weekly.

He concludes that biofuels decrease dependence on foreign oil, contribute to the U.S. economy and reduce carbon footprint. The feedstock is nontoxic, and if an accidental spill occurs, it biodegrades. 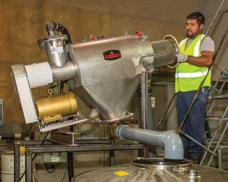 A Centri-Sifter™ centrifugal dewatering separator removes particles from restaurant waste slurry as it is converted into high purity liquid feedstock for biodiesel. The unit is inclined to increase dwell time and improve drainage of free liquid. A 10 hp (7.5 kw) motor enables the unit to handle heavy slurry feed without overloading. Quick-Clean design allows easy changes of the screen basket.

Liquids, and particles less than 600 micron, flow from the outlet of the centrifugal dewatering separator into a 40 in. (102 cm) diameter, 4-deck Vibroscreen® circular vibratory screener that removes progressively smaller suspended solids.