Quality of castings improves as smoother molds yield better finishes. The foundry also realizes a 5 percent labor savings and a similar rise in productivity from reduced grinding of castings and less sieving of sand for foreign matter and lumps.

The improvements stem from the CENTRI-SIFTER centrifugal separator from Kason Corporation, which sifts the recycled sand to "as fine as beach sand," according to Leroy Martz, Cast Rite Metal co-owner. It also takes out foreign matter such as pieces of wood and metal.

Martz continues, "No more lumps and foreign material end up in our molds. This was affecting quality of castings, as some areas of the mold did not pack well because of lumps in the sand."

The smoother texture sand is easier for the molder to work with. "It flows nicely into the mold and fluffs as the molder works with it," Martz says. Previously the molder spent extra time sieving the sand to pick out the foreign matter.

As Cast-Rite's sand is recycled, a bucket elevator conveyor carries it from the broken molds to a 40-ton-capacity hopper under the ceiling. The hopper is timed to drop 700 lbs (318kg) of sand at regular intervals into an inclined vibratory screen, which discharges into the CENTRI-SIFTER model YO below. The inclined screen removes the largest lumps, while the CENTRI-SIFTER separator scalps foreign matter and oversize particles from on-size sand. The low-profile sifter also saves space, measuring 4' (1219 mm) high by 3' (915 mm) wide.

In the sifter, helical paddles, rotating above a 10-mesh, 10" (25 mm) diameter perforated plate cylindrical screen, impart centrifugal force to the sand particles, propelling them continuously against and through the screen. The over-size particles discharged from sifter's tangential spout are reintroduced into the sifter until all the sand reaches uniform size. The on-size particles fall through the center of the sifter onto a belt, where they mix with new sand and travel 20' (7000 mm) up an incline to the muller.

In the muller (which holds 800 lbs [363kg] of the sand mixture for each heat), two wheels crush the sand further and mix it with bentonite, other additives and 3 percent water. From the muller, the sand travels on a horizontal belt to the PK unit and another hopper, which drops the sand into the Roto-Lift molding station. In the PK unit, large rotating brushes scrub the sand to break any final lumps.

Before installing the CENTRI-SIFTER centrifugal screener, the vibrating screen and the brushes in the PK unit broke up the sand to a lesser level of fineness. The result was rougher, irregular size sand particles, and poorer surface finishes on castings.

Three years ago, Cast Rite searched for a screening device to remove foreign material and lumps from the sand to relieve the molder from picking it out by hand. Kason's representative informed Cast Rite about a nearby foundry having success with a centrifugal sifter. After Kason tested the recycled sand with a CENTRI-SIFTER separator at its Millburn, NJ, facility, Cast Rite made the purchase.

Martz says the finer sand improves Cast Rite Metal's productivity and quality, while reducing labor by about 5 percent. "The sifter brings many advantages, including a reflection in sales, that make it well worth its price." 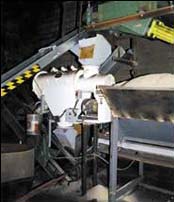 Recycled sand travels up bucket elevators to 40-ton capacity hopper which releases sand to inclined vibrating screen, then to the Kason CENTRI-SIFTER separator. On the right, new sand is added to on-size sand exiting the centrifugal sifter onto the conveyor belt.

Screened, fluffy sand is easy to work with, and eliminates the need to remove foreign manually.