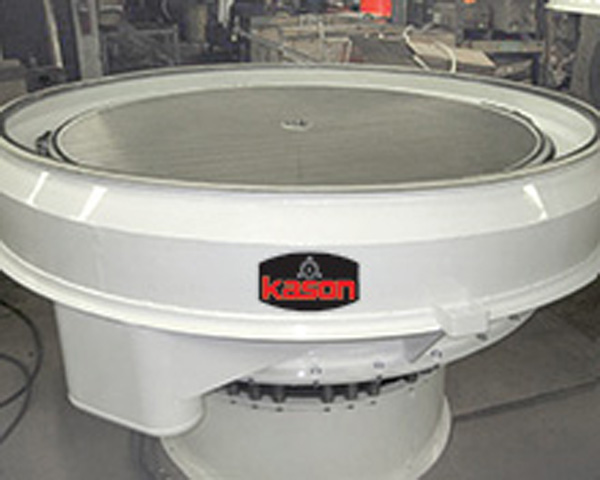 This vibratory screener model K72-1K-SS discharges oversize particles 360¡ around the periphery of an "External Kascade" circular screening deck, instead of through 15¡ to 25¡ openings of conventional discharge spouts.

The screener, a 72 in. (1829 mm) diameter Vibroscreen® model with "External Kascade" deck, is intended for screening of wet or dry bulk materials containing a large percentage of oversize fractions, at higher rates than attainable with conventional screeners.

As material is fed onto the center of the screening deck, on-size particles pass through the screen and funnel through a lower discharge chute. Oversize particles flow outward in a spiral pattern, and cascade at any point over the periphery of the circular screen onto a spiral vibratory trough that directs the material into a high capacity discharge spout.

Allowing oversize particles to cascade 360¡ around the screen's periphery, instead of through a 15¡ to 25¡ opening created by a conventional discharge spout, eliminates a discharge capacity restriction associated with overs building up around the screen circumference, resulting in higher screening efficiency, higher capacity, less chance of screen blinding and longer screen life.

Typical applications will be removal of fines from products such as plastic pellets, cereal, pet food, fertilizer, salt, sugar, etc. as well as dewatering large amounts of solids.

The special screening deck is offered on any of the company's Vibroscreen separators ranging from 40 to 72 in. (1016 to 1829 mm) in diameter, and is available as a retrofit kit for any make of circular vibratory screener.

The upper portion of the circular screen frame is tapered to reduce the diameter and weight of the dust cover for easy handling.

Ask Us a Question