Aristech Chemical Corp., LaPorte, Tex., has two production lines for the manufacture of polypropylene. Each line has two extruders and underwater pelletizers but a common sump for the water used to cool and transport the pellets. "This created an unacceptable situation for us," reports Joel Farber, Aristech's coordinator for project engineering, "which was solved by installing special sieves on each extruder."

With the original plant design incorporating common sumps, fines from one extruder could recycle into the other extruder's water stream. And dissimilar products were often run on the adjacent extruders. "Also," says Farber, "the amount of fines in the sumps would sometimes reach excessive levels, preventing proper operation of the water-Ievel control system. An adequate flow of water, crucial to the pelletizing process, was often difficult to maintain."


The Solution Was Sieves

Aristech decided to install Cross-Flo stationary dewatering sieves from Kason Corp., Millburn, N.J., on each of its extruders to separate fines and eliminate the fines from one extruder circulating into the water stream of the other.

With the sieve design, water and fines flow together into a headbox, overflowing a weir at the top of the headbox, falling onto an acceleration ramp, and moving down a sloped screening deck. The fines and oversize particles are discharged from the lower edge of the screening deck, where they fall into a collection system. Water filters through profile wire screening, exits the sieve, and continues on its recycle loop.

The extended acceleration ramp increases the feed velocity to the screening deck. This optimizes the initial capacity of the unit because the "swallowing" capacity of the profile wire screening at the inlet or dilute end of the deck is directly proportional to velocity of the slurry. The ramp also permits fibrous materials to become aligned with the direction of flow. This means that screen openings can be based on fiber length rather than diameter, resulting in wider openings. Because liquid throughput depends on opening width, the wider openings enable maximum dewatering rates.

The sloped screening deck can be adjusted according to the characteristics of the solids and liquid, for optimum separation rates. The wire sections, roughly triangular in section, have rounded edges at the upstream ends to prevent fiber stapling. The configuration causes a thin layer of the flowing liquid to be sliced and cling to the wall of the preceding wire, which accelerates fluid through the screen.

Aristech installed two of the sieves in late 1989 and two more in 1990. A screen-size opening of 0.02 inch was tried during the initial startup phase, according to Farber. "However, all of the units were eventually retrofitted with screens having 0.01 in. openings, in order to achieve optimum fines separation." 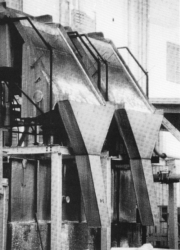 Aristech Chemical Corp. installed special sieves on each of its extruders sharing a common water sump, to separate fines and eliminate fines from one extruder circulating into the water stream of the other extruder.