Screening Out Brewery Solids for Savings

A brewery waste water stream carries just about any solid contaminant that can come from the brewing operation-spent grains, broken glass, bottle label pulp. Separating and dewatering this material calls for high-capacity equipment preferably without moving or corrodable parts, to minimize down time.


Use of Stationary Sieves

There's a growing trend in the use of adjustable-slope dewatering sieves-low-cost, high-capacity screens without moving parts-which screen out the particle sizes desired by adjusting the tilt angle. In sieve operation, the process stream overflows from a headbox onto a steeply pitched ramp. This gives the stream the requisite flow velocity and orients entrained fibers in the direction of flow. When the stream reaches the screen section, spaced profile wires provide slots perpendicular to the flow which successively slice off thin layers of liquid.

Each sliced liquid layer, in accordance with the "Coanda" effect, clings to the profile of the wire it passes over, bending around the corner and dropping off. Entrained fibers and trash, however, continue downward along the tops of the wires until they reach the bottom of the screen and are discharged.

The slope of the screen, along with slot size, establishes the size of the particles to be screened out. A steeper slope will remove finer particles with a wetter discharge, while a flatter slope will remove coarser particles in a somewhat drier state. Another consideration for choice of slope is the adequate, continuous discharge of the screened-out solids from the bottom of the sieve.

At one large brewery, a "Cross-Flo" dewatering sieve manufactured by Kason Corp. removes suspended glass, pulp and grit and miscellaneous trash from a 720 GPM waste stream. The screen utilizes 3/32 in. C-profile stainless wires spaced at .020 in. The only maintenance is twice-a-week swabbing with sulfuric acid to remove scale deposits (see Figures 1 and 2).

The Cross-Flo sieve is available in two feet width up to six feet width. Units can be paralleled side by side and back to back, served by a single headbox.

Because of space considerations, most breweries use circular vibratory separators. These require a third or less the headroom of the Cross-Flo sieves, though they also require electrical energy and some maintenance because of their moving parts. A number of applications for vibratory separators are outlined.

Brewery bottle washing systems must cope with dirt, grit, broken glass, glue solids and label pulp, as carried off by the hot caustic solution. Most such systems require a good deal of caustic, labor and parts, while giving incomplete separation. However, a fully-automatic bottle soaker/washer/separator system at Labatt's Breweries of Canada, Ltd., has largely resolved these problems. Much of its success can be attributed to a 48 in. diameter, two-deck, circular screen vibrating separator produced by Kason.

Periodically during the washing cycle, the 5OJo caustic solution, label pulp and some glass is emptied into a receiver tank. An agitator keeps the solids in suspension while the liquid is pumped at 150 GPM into a Kason VIBROSCREEN® separator (see Figure 2). The solution first passes through a coarse (8 in.) screen, leaving behind most of the. glass and label pulp; a 60 mesh screen below it removes the rest. The unit handles the high instantaneous loads common to these systems.

Pulp is dropped into a buggy with a perforated bottom. As the load compacts, caustic is squeezed out, drains to a sump pump and is returned to the receiver tank.

This low maintenance separator operates about 4000 hrs./yr. It is shut down once a year for inspection and maintenance-motor bearings cleaned and repacked and screens replaced if needed. Screens are replaced about every two years.

An additional benefit seems to be in extended caustic washing solution life. The previous system's soaker/washer compartments were emptied and cleaned about every 100 hours, requiring a whole shift to complete. The new system is cleaned every 350 hours, saving labor , materials and caustic.

Several large breweries separate coagulated protein particles such as hop resins from yeast slurry. Though these impurities total less than 1 % , this step is necessary for yeast recycling and for preventing the blocking-up of dewatering centrifuges down the line.

Common brewery practice is to pump spent grain in water (about 20% solids by weight) to stationary screens for preliminary dewatering. Afterwards, the grain goes to presses and driers to produce animal feed. The screen and press effluents are often discharged directly to sewerage, resulting in the loss of grain fines as well as raising the B.O.D. of the effluent. These grain fines with their high protein content (29% as against the 20% protein of the large sizes) can easily be recovered by vibratory separation. They can then be mixed with the larger grains for a higher selling price (and comparatively-quick amortization of the separators).

Fig. 1 Schematic of the Kason Cross-Flo adjustable-slope dewatering sieve which screens out the particle size desired by adjusting the tilt angle. 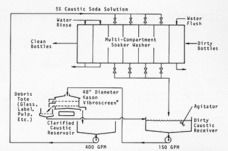 Fig 3. Soaker/washer/separator system at Labatt Breweries works as follows: Timer programs the emptying of compartments for cleaning those most heavily contaminated. When compartment is empty, timer cuts in clean-caustic pump and caustic scours the compartment floor before exit valve closes. Timer cuts pumps out when compartment is again filled with bottles. Probe starts agitator as soon as caustic enters dirty-caustic receiver. After suitable time lapse, pump starts feeding Kason VIBROSCREEN® which is in continuous operation. Tote buggy bottom is perforated so that caustic squeezed out by the weight of the pulp can drain back to dirty-caustic receiver.