SPARTA, NJ—The New York, Susquehanna and Western Railway (NYSW) transports a variety of commodities to its bulk transfer facilities located in the heart of the metropolitan New York market and in upstate New York. One of these NYSW units is Susquehanna Bulk Systems, a food-grade bulk-transfer facility in Sparta, NJ. SBS Sparta specializes in transferring dry-bulk granular sugars from covered hopper railcars into bulk trailers that carry the materials to their final destinations. In the last five years, SBS Sparta has transferred over 215,000 tons of sugar, according to Craig Hemsworth, office manager at the facility.

Inside a 5000 sq ft (465 sq m) building that holds two railcars, sugar is transferred using one or both of two parallel auger systems. To start the transfer process, a bootjack is elevated until it comes in contact with the bottom of the railcar to be unloaded. Then sugar drops through the sealed opening in the bottom of the railcar and into an under-track auger, which moves the material into a vertical auger. This auger moves the sugar up into an overhead horizontal auger above the truck into which the material will be loaded.

One step remains before the sugar can be fed into the truck. "Sugar tends to lump up, so our customers require the sugar to be sifted to screen out the lumps," Hemsworth explains.

To remove lumps from granular sugar, the overhead auger feeds the material into a 60 in. (1524 mm) diameter, 3-mesh VIBROSCREEN circular vibratory screener from Kason Corporation. An unbalanced-weight gyratory motor mounted directly beneath the screening chamber produces both vertical and horizontal vibration of the device's spring-mounted screening deck. The vertical vibration causes sugar particles to pass through apertures in the screen at high rates, while the horizontal vibration moves sugar lumps across the screen in controlled pathways until they exit through a spout at the periphery of the screen and drop into a tailings bin to be discarded.

Besides removing lumps, the process screens foreign objects mixed with the sugar. "If there's a rock or other debris in the sugar, the screener will remove it," Hemsworth says.

After exiting the screener, sugar passes through a rare earth magnet, which removes any metal filings that might be in the material. The screener and magnet are critical control points in SBS's HACCP program. These points must be identified and maintained as required by the American Institute of Bakers.

The SBS Sparta facility was designed to accommodate two parallel systems for moving sugar, allowing simultaneous loading of two trucks and continued operation if one system goes down, according to John Fenton, vice president of marketing and sales for the NYSW.

In the facility's early years, however, only one of the systems was functional. To make the second system operational, new owners of the company installed a second 60 in. (1524 mm) diameter VIBROSCREEN screener with a 3-mesh screen. Like the first screener, the second was purchased through Cino Equipment, a Kason representative in Berkeley Heights, NJ. "Since our first Kason sifter was problem free, we purchased another," Hemsworth says.

Subsequently, one customer requested finer screening, so the company replaced one of the 3 mesh screens with a 6 mesh screen. This system discharges into trucks parked on a 120 ton scale in the loading bay.

Hemsworth says the facility typically screens about 120 tons of sugar a day, "but we've done up to 20 loads a day—almost 500 tons—using both sifters."

Each of the high-capacity VIBROSCREEN units can screen up to 36 tons/hr. The rate at which material passes through the screeners depends in part on the last time they were cleaned. In conformance with GMP requirements, SBS cleans the screeners with steam and hot water either once a week or after a load. Personnel inspect the screeners after every loading operation to see if immediate cleaning is required. All material contact surfaces are of 304 stainless steel.

Other than cleaning, the screeners require no regular maintenance. As for repairs, Hemsworth adds, they have been limited to single instances of replacing the springs and redoing the motor windings on the older of the two units. "After 15 years, I guess you have to expect something to eventually wear out," he says.

Two 60 in. (1524 mm) diameter Kason VIBROSCREEN screeners are used to load trucks with sugar at the SBS Sparta facility.

Each of the high-capacity discharge VIBROSCREEN units can screen up to 36 tons/hr, allowing trucks to be rapidly loaded with sugar.

Overhead horizontal augers move sugar into the two VIBROSCREEN screeners in the facility. Each screener separates sugar lumps from grains by vibrating a single spring-mounted screening deck located in the upper part of the unit. The vibration is produced by rotation of an unbalanced-weight gyratory motor located below the screening chamber. 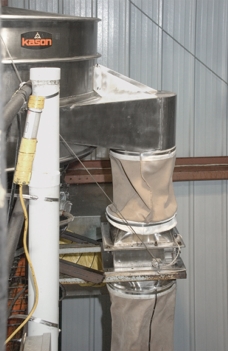 Oversize material falls through a 4 in. (102 mm) diameter chute and drops into a tailings bin.

At the SBS Sparta facility, sugar is transferred from railcars to bulk trailers that carry the materials to their final destinations.