The remote Isle of Lewis, in Scotland's Outer Hebrides, seems an unlikely place for technological innovation, but the island's capital of Stornoway is the site of an unusual glass-recycling operation. The plant is novel in that it economically converts a relatively small volume of waste bottles and jars into a variety of products, some of them quite valuable.

Owned and operated by the Western Isles Council, the plant started up in April 2004 and has a nominal throughput of about 2-tonnes/h. In contrast, conventional recycling plants may process up to 30 m.t./h, says Howard Graham, president of Technical Engineering Services (U.K.) Ltd. (Carlisle), who provided the equipment and built the Lewis plant. These plants, he explains, are typically located in heavily populated areas and waste containers often have to be transported long distances, typically to remelt plants, which is costly.

The plant employs two basic processes: a glass-breaking and grinding system made by Glass Aggregate Systems of Faribault, MN, USA, and classifying equipment from Kason Corporation that separates the glass into the desired sizes. The classifier is the key element because it allows the plant to make relatively valuable products for the local market, says David MacLeod, senior recycling officer for the Western Isles Council.

Previously, Lewis was landfilling all its glass containers because the cost of shipping the glass to the mainland for recycling was about double the market price of the waste material. Graham notes that about 70% of the glass that is recycled in the U.K. is used as aggregate in road making and the rest is re-melted for bottle-making, and glass sold for these applications sells for as little as £5 ($9)/tonne. On the other hand, land filling was an unsatisfactory disposal method in Lewis because landfill space had become increasingly expensive and the dumping cost had increased to £41 ($77)/tonne from about £28 ($52)/tonne less than two years ago. "We expect the cost to go to about £60 ($112) per tonne by 2010," says MacLeod.

The new plant can produce not just aggregate and remelt material, but various higher-value products for other uses. Initially, the plant has been producing decorative glass for landscaping, which sells for about £50-60 ($94-112)/tonne. Other product grades are being test-marketed as shot-blasting material and as filtration media for potable-water treatment plants. Glass used for these purposes sells for £100 ($187)/tonne or more, says Graham.

The plant cost approximately £60,000 ($112,000) and the total operating cost is about £6-7 ($11-13)/tonne, says MacLeod. "We haven't done a detailed cost-benefit analysis, but we expect the plant will pay for itself in a few years," he says. "Our main interest is to avoid sending material to a landfill, but this process also gives us an opportunity to make saleable products. If we were a commercial organization, this would definitely have the potential to be a profitable process."

Incoming bottles are loaded into a hopper, from which they drop onto a vibrating tray that controls the flow of bottles onto a conveyor belt. Although the system is designed for processing bottles that have been separated from other municipal waste, it can also remove metal cans, plastics and other material accidentally mixed with the feed.

First, ferrous metal is picked off the belt by a magnetic drum and sent to a dumpster. The bottles and extraneous material are conveyed to a popper unit, which uses rotating hammers to shatter the glass into pieces no larger than 2 to 3 in. (50-75 mm) in diameter. Next, a shearing unit (a rotating drum with a fixed blade) liberates the glass from paper labels and foil, after which the material flows onto a revolving cylindrical screen called a trommel. The glass particles drop through the screen into a sanding unit and the rest of the waste continues across the screen and is ejected into a bin.

In the sander, the glass is ground into particles that have no sharp edges and range in size from about 0.75 in. (19 mm) to dust that is less than 0.12 in. (3 mm). Finally, the Kason classifier does the critical job of separating the glass particles into the necessary size fractions for the desired applications. This is no easy task, since the material is abrasive and may blind screens, particularly if it is wet or contains residue.

The VIBROSCREEN classifier, as it is called, is a vibratory screener that consists of up to five circular, horizontal screens located one above the other in a vertical, cylindrical housing. Mounted to the bottom of the unit is a high-torque, 1-HP gyratory motor with a double-extension shaft at both the top and bottom ends of the motor. Eccentric weights are fitted to each extension to give the motor an imbalanced-weight gyratory motion. The entire unit is supported on a circular base by rugged springs that allow the screen assembly to vibrate freely without transmitting vibration to the plant floor.

Material to be separated is fed onto the center of the top screen, whose mesh is the largest. Oversize particles are moved to the screen periphery in a spiral pathway, and discharged through an outlet, while undersize particles drop through to the next screen. The mesh sizes become progressively smaller toward the bottom of the unit.

Separation is enhanced by the three-dimensional motion generated by the unit's gyratory motor. The motor's top eccentric weight generates a horizontal flow to the screen assembly, while the bottom weight creates a high-frequency tilt on the screens. The combination of the horizontal and vertical movements creates a tangential action that moves oversize material laterally across a screen and encourages undersized particles to flow through the screen. The machine can be optimized for a particular application by varying the mass of either eccentric weight.

In the Lewis installation, the VIBROSCREEN classifier is a 48" (1220 mm) diameter unit with four screens that can process up to 3 tonnes/h of glass aggregate. The top screen scalps pieces of glass ≥0.51 in. (13 mm), along with residual rubbish, and the other screens sequentially separate out glass particles ≥0.39 in. (10 mm), ≥0.24 in.(6 mm) and ≥0.12 in. (3 mm). Dust is collected at the bottom, as noted earlier. Material ≥0.51 in. (13 mm) is used for decorative glass; ≥0.24 in. (6 mm) glass for water filtration or road aggregate; and ≥0.12 in. (3 mm) for weather protection in the cement walls of houses. In the latter application, called "rough casting," the glass particles are thrown against a wet cement wall and become embedded. Particles ≥0.12 in. (3 mm) can also be used for shot-blasting, as can the dust which produces a smoother finish.

In the case of shot-blasting, glass is attractive "because it makes less airborne dust than other materials," says Graham. "Also, we have found that when you shot-blast with glass you use less material because it's more aggressive." He points out that the UK has banned the use of sand for shot-blasting because it causes silicosis. "Other materials can be used, such as iron foundry or copper slag, but glass is less expensive.

Glass is also finding applications as a water filtration medium, where it substitutes for sand or diatomaceous earth. "The advantage of glass is that is more easily back-flushed," says Graham.

The equipment used in the Lewis plant has proved to be "robust and reliable," says MacLeod, and there have been "no problems of any significance. I think our only downtime has been when we have had an odd bit of stone mixed with the glass and we have had to stop the operation to clean the stones from the conveyor."

The VIBROSCREEN classifier uses screens made of a special stainless steel that resists abrasion. Screen-blinding is precluded by means of a Kason "Ball Tray Anti-Blinding Device" that utilizes the multi-plane inertial vibration of the screener to bounce elastomeric balls between the upper "operating" screen and a lower coarse-mesh "ball screen," thereby dislodging near-size particles from apertures of the upper screen.

The plant has attracted a lot of attention because of increasingly strict environmental regulations and the value of the glass products. Graham notes, for example, that the Republic of Ireland has banned landfilling of bottles and that the British Government requires hotels and clubs of a certain size to recycle 40% of their packaging. Also, companies that install recycling plants or use recycled glass may be eligible for grants from the European Union or national grants.

Scotland, for instance, has set up a Strategic Waste Fund within the past year to provide financial help for recycling operations. "We were too early to qualify for that," says MacLeod, "so our plant was funded through our own budget."

Incoming bottles drop through the hopper onto a belt that feeds the popper unit and sander (right rear), which break the glass into particles of 0.75 in. (19 mm) or less. The glass is then fed to the Kason classifier (left rear).

The Kason classifier is a vibratory separator that contains several screens to separate material by size. The unit is vibrated in an eccentric manner by a gyratory motor and is supported by rugged springs that allow free movement.

Glass bottles and jars of all kinds, with labels and metal foil attached, are the feed for the Lewis glass-recycling plant. 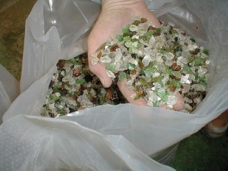 The glass products separated by the Kason classifier range from dust and fine material that can be used for shot-blasting to decorative glass for landscaping.