To meet increased demand for bread in Newfoundland due to population growth, the plant needed to overcome a bottleneck in flour screening, which was limited to 7,000 lb/h (3,100 kg/h) of capacity (the equivalent of 2.5 bulk bags) using two existing gyratory box screeners. To boost output the plant installed two pressurized CENTRI-SIFTER centrifugal sifters from Kason Corporation, which can process 10,000 lb/h (4,500 kg/h), a 43% increase.

Wilfred Verge, maintenance manager at the site, says, "Since the system is fully enclosed from bulk bag unloader, hopper and rotary valve, to sifter to silo, it prevents contamination of the product and plant environment while increasing capacity," adding, "The old box screeners were vented through a breather sock that allowed dust to escape."

A bulk bag unloader discharges the contents of 2800 lb (1275 kg) bulk bags into a hopper that has a provision for manual dumping of minor ingredients. The material is metered by rotary valve into a pneumatic conveying line, and is directed through a diverter valve into either of two model MO-PS-SS CENTRI-SIFTER&8482; centrifugal sifters. One is fitted with a 30 mesh (600 micron) screen for white flour and the other with an 8 mesh (2360 micron) screen for whole wheat and "smart flour," a white whole wheat flour used in Canada Bread’s Smart Bread brand. Multi-grain bread is created from Smart Bread by adding the seeds and grains during mixing.

Flour entering the sifter’s inlet is fed by a screw into a horizontally oriented cylindrical sifting chamber, where rotating helical paddles continuously propel material against the screen, accelerating the passage of on-size particles through screen apertures. The paddles, which never contact the screen, also serve to break up soft agglomerates. Oversize particles are ejected through the downstream end of the screen cylinder, and exit through a discharge port.

Labor required for cleaning the screener is cut by roughly 90 percent, owing to its stainless steel construction to USDA, FDA, BISSC, 3-A and other sanitary standards, and to the two-bearing cantilevered shaft design that allows quick removal of internal components.

The externally-mounted bearings are located between the screening chamber and motor drive, eliminating the need for a bearing on the hinged end plate, allowing the retainer plate, screen cylinder and paddle assembly to slide freely from the shaft end for cleaning, screen changes or inspection. Wide spacing between the bearings, a large diameter shaft and a flexible shaft coupling combine to prevent vibration at high speeds under heavy, imbalanced loads.

"The old gyratory box screeners required about 90 minutes to clean, but the new ones take only 10. We open the end plate, pull out the basket and paddles, blow them off, and replace them," notes Verge. 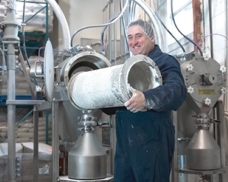 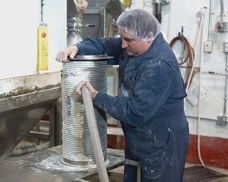 Screened flour ready for blending with other ingredients.