A Kason in-line Pneumati-Sifter VIBROSCREEN® circular vibratory separator has screened over one million tons of clay over 25 years without an equipment failure and shows no signs of quitting, according to John Taylor, production manager of The Pfaltzgraff Co., a 190-year manufacturer of stoneware products.

The system moves raw materials from any of ten 50-ft high silos containing clay, silica, alumina, lime and other ingredients through a pneumatic conveying system to a central weigh hopper. Ingredients are weighed in sequence and discharged as 3000 lb (1360 kg) batches into a pressurized surge hopper equipped with a rotary airlock valve that meters 600 lbs/minute of material into the 60" (1525 mm) diameter in-line sifter.

The sifter, designed for 14.7 psig pressure, removes agglomerates, paper scraps and other foreign particles larger 0.074 in. (1880 micron), preparing the clay that will form the stoneware "body" and determine its finish. Magnets upstream and downstream of the screener remove iron particles.

"Elbows of the pneumatic conveyor lines wear out every 10 to 12 months because the system runs highly abrasive materials three shifts per day, five days per week," explains Taylor, "but aside from screen changes every two years, nothing on the Kason unit has worn out, including the gyratory motor which we lubricate periodically," he says.

How the screener operates

The circular vibratory screener is equipped with an imbalanced-weight gyratory motor that imparts multi-plane inertial vibration to two spring-mounted screening decks, causing oversize particles to vibrate across the screen surface in controlled pathways to the screen periphery where they are discharged. Screening efficiency improves by forcing the particles to pass over a maximum amount of screen surface.

The unit screens a 3000 lb (1360 kg) batch in 5 minutes in-line with the pneumatic conveying system. To prevent sharp, angular particles from blinding screen apertures, the screener is equipped with a "ball tray" anti-blinding device consisting of elastomeric balls that are captive in a narrow space below the top #10 mesh (0.074 in.,1880 micron) working screen and above the #4 mesh (0.187 in., 4750 micron) ball screen. Vibratory action of the screener causes the balls to bounce against the underside of the working screen, dislodging particles wedged in screen apertures.

Oversize particles exit through a discharge spout at the periphery of the top frame. Screened clay exits the bottom frame discharge into a holding hopper, then into a pug mill, which mixes the clay with water before it is conveyed through an auger, cut, wrapped in plastic and stored for up to three months. The stoneware production takes place in numerous manufacturing processes.

The Pfaltzgraff Company was founded in 1811 in York, PA by the Pfaltzgraff family of German immigrants. In addition to being a leader in casual dinnerware, the company markets stainless steel flatware, and glass beverageware.

The company takes pride in its tradition of craftsmanship, service and quality, to which the screener contributes. "The screened particles are crucial for the fine finish of our dinnerware, and help make our fine product at a consistently high level," says Steve Blouse, parts coordinator.

"For any piece of equipment to operate for 150,000 hours without a hiccup is unusual, which is why we notified Kason about it," adds Taylor.

This Kason VIBROSCREEN® in-line pneumatic screener has removed agglomerates, paper scraps and other foreign debris from more than one million tons of bulk clay ingredients over 25 years without failure.

Screened clay ingredients are discharged from the Kason in-line circular vibratory screener (rear) into a holding hopper, then into a pug mill that mixes the material with water. Cylinders of clay are cut, wrapped in plastic (foreground) and stored for subsequent molding of stoneware. 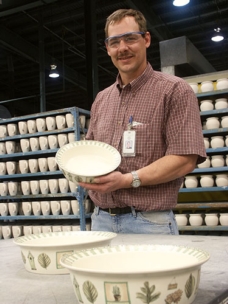 John Taylor, production manager, says that screening to a maximum particle size of 0.074 in. (1880 microns) is crucial to the fine finish of Pfaltzgraff stoneware.

High quality, casual dinnerware is the hallmark of Pfaltzgraff, the oldest pottery maker in the United Stated, founded by the Pfaltzgraff family in 1811.