SALT LAKE CITY, UTAH — When Chett Boxley obtained his Ph.D. in analytical chemistry from the University of Utah in 2003, he had no idea that his subsequent research work would lead to his present job: general manager of a company that makes kitty litter.

However, PURR-fect Solutions, LLC (PFS), makes no ordinary litter. Rather than using sodium bentonite clay, the basis of conventional litter, the company makes its product (PURR-fect Harmony) from fly ash, an unwanted byproduct of coal-fired power plants. The manufacturing process is environmentally friendly, says Boxley, because it avoids the need for strip mining to obtain bentonite and it reduces the amount of fly ash that has to be landfilled by power plants.

Fly ash is pelletized with an aqueous solution, then conveyed to a circular fluid bed dryer, where the wet pellets are dried to the appropriate moisture content before the final product is separated from oversized and undersized material. The key piece of equipment is a Vibro-Bed™ circular fluid bed dryer supplied by Kason Corp. (Millburn, NJ).

Boxley notes that other environmentally friendly litters are on the market, derived from recycled products, such as paper, corn and wheat, but he says they don't perform as well as PURR-fect's product, particularly with respect to odor control and clumpability. "Our litter looks and feels like clay, which is the gold standard for cat litter, and it has excellent odor control," he says.

Setting up a production facility presented a new challenge for Boxley and his colleagues. After the company was formed in the spring of 2012, he set about buying production equipment. A pilot plant was started up in November 2012 and is now producing and selling about 650,000 lb/year (295,100 kg/year) of litter. For pilot quantities the process is a batch operation, but a commercial system would be continuous, says Boxley.

PURR-fect's litter contains about 85% fly ash (a fine powder consisting mainly of alumina and silica oxides) and 15% odor-control additives. The ash is stored in a silo, from which it is pneumatically conveyed to a pan pelletizer. There, the powder is mixed with an aqueous solution that contains an activator to promote the formation of pellets, which range in size from around 100 mesh (140 microns) to 6 mesh (3,350 microns). "We need all those sizes," says Boxley, noting that a typical clay litter mix consists of 12–50 mesh (1530-279 microns) particles.

Wet pellets fall from the pelletizer into a small hopper, from which they are transported by a flexible screw conveyor to the circular fluid bed dryer. The machine has a 30 in. (762 mm) dia. circular chamber that has a perforated plate for a deck. Process material is gravity fed from the conveyor through an 8 in. dia (203 mm) intake port in the top of the dryer and fluidized by hot air that blows upward through the perforated plate. Continuous air flow and vibration separate and fluidize individual particles, maximizing the surface area of material and the rate at which it dries.

The air stream, generated by a 5 hp (3.7 kW) electric fan, flows through a duct and past a series of electrical heaters which, in the case of the litter, heat the air to 260°F (112°C). At the point where the duct reaches the underside of the plate it widens to a cone that covers the area of the plate. The feed rate is determined by the speed of the conveyor, which is set by a programmable logic controller (PLC). The dryer has its own electronic controls, which govern the drying rate by varying the fan speed.

The dryer reduces the moisture content of the pellets from about 5 wt% to 0.3 wt%, with a residence time of "a few minutes," says Boxley. "There is no subsequent agglomeration in the dryer, which is very important for us." The machine can process up to 2 million lb/year (0.9 million kg/year) of litter, working an eight-hour shift. "Right now we are operating at only about one-third that rate, so we have plenty of room for expansion with our existing equipment," he says.

The drying and removal of dried pellets from the dryer are enhanced by vibrating the vessel, using two 0.5 hp (0.37 kW) electric motors attached to opposite sides of its exterior. As the pellets dry, the vibration causes them to migrate across the plate in a circular, radial pattern into the discharge port at the chamber periphery.

After the pellets exit through the port they fall into a circular vibratory screener—first onto a 12 mesh (1530 microns) screen that retains unwanted oversize material, then down to a second, 50 mesh (279 microns) screen that filters out fines. The oversize particles are reground and the material, along with the fines, is recycled to the pelletizer.

Pellets passed by the screener are collected in bins and manually dumped into a rotary mixer, where the material is mixed with clumping agents and odor control ingredients to obtain the final kitty litter product. The litter is packaged in 12 lb (5.5 kg) and 22 lb (10 kg) plastic bags. A larger bag, of 35-40 lb (16-18 kg), is being designed.


Dryer selection was preceded by a careful search

PFS purchased the dryer through Clark Draney, of Process Control Equipment (PCE, Sandy, UT), manufacturers' representative. Prior to making a decision on the fluid bed dryer PFS investigated other types of dryers, such as rectangular fluid bed dryers, turbo dryers, and large ovens.

"The rectangular dryer was too large and expensive," says Boxley. The turbo dryer was "really expensive," he says, and the ovens were "a batch type process" as well as being too large.

PFS selected the circular fluid bed dryer because its circular configuration offers an inherently high strength-to-weight ratio, employs a light gauge shell and components, and does not require heavy steel sidewalls or cross braces as does a rectangular dryer. "Also, the price was very competitive. This was especially important for us, as a startup company," says Boxley. He adds that the machine has required no attention, beyond "an occasional squirt of oil to the blower motor."

PFS is supplying litter to a few regional pet store chains and expects that sometime next year the market will expand to a point where production will have to be scaled up. As noted earlier, the current equipment has the capacity to triple production, operating on a single shift.

Boxley's family is allergic to cats, so he does not own one—but he says the feedback from cat owners is highly favorable. 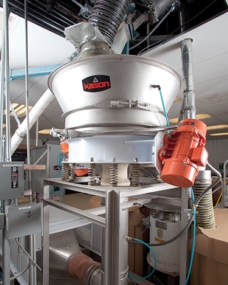 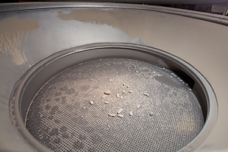 Vibration and hot air blowing upward through the perforated plate separate and fluidize individual particles, maximizing the rate at which the material dries.