JACKSONVILLE, FL—The JEA Northside Generating Station had two expensive crushers approaching the end of their service lives. JEA knew that replacing the aging crushers, a necessary component in the ash-processing system, would entail major capital costs. The crushers performed the essential service of preventing bed-ash particles larger than 3/16 in. (7.6 cm) from entering the disposal process, since oversize particles would plug the pumps that move the ash slurry to a settling basin. The company wanted to find a way around the cost and operational limitations of the crushers while still ensuring that oversized particles were separated.

The benefits JEA targeted were ambitious: (1) avoid the estimated $250,000 expenditure to replace two 30 in. (76.2 cm) diameter, double-roll crushers; (2) eliminate disruptive installation of these large pieces of equipment and associated labor expenses; and (3) reduce future maintenance requirements, which typically incurred downtime of a half-day or more. An ideal new approach would enable JEA to improve the coal- and petroleum-coke-fired station's ability to keep its baseload-power operation running with almost no shutdown for crusher-related maintenance.

The Northside Generating Station operates two of the largest circulating fluidized bed (CFBs) combustors in the world, each capable of producing nearly 300 MW and generating a total of 2,000 tons of ash daily, 60 percent bed ash and 40 percent fly ash. During the time JEA was exploring alternatives to the processing of bed ash using double-roller crushers, it was also testing a circular vibratory screener for processing fly ash. JEA wanted to replace a 2 sq ft (0.185 sq m) shaker screen, which required constant maintenance, with a circular vibratory screener, and reduce maintenance requirements. While seeking this replacement screener in the fly-ash line, it occurred to Jerry Kowalski, a structural engineer at JEA, that a circular vibratory screener might also be a good candidate for separating oversized particles in the bed-ash line, thus eliminating the expensive crushers.

"Although fly ash is typically as fine and light as talcum powder, moisture in the circulating gas stream of the boiler can cause ash particles to form clumps larger than 3/16 in. (7.6 cm)," said Kowalski. "For this reason, oversized particles must be screened from the fly ash."

Bed ash, which is coarse, heavy and resembles beach sand, exits the boilers as glowing grains close to 500ºF (260º C) and is carried away from the boilers via a 100 ft (30 m) drag-chain conveyor. The conveyor deposits the bed ash into a 600 ft (183 m) long pneumatic line that transports it to a dedicated bed-ash silo, where the ash arrives cooled to approximately 250ºF (130º C). After the ash cools to about 150ºF (66ºC), it is put through the crusher, then drops by gravity 8 ft (2.4 m) directly into a mix tank below. The fly ash enters the mix tank the same way. Both the bed ash and fly ash are mixed into a slurry made up of "on-size" particles in a single tank, then pumped 4,000 ft (1219 m) to settling ponds. There is one bed-ash and one fly-ash silo for each of the two combustors, totaling four silos.

"Since oversize particles comprised less than 1% of our bed ash, the use of crushers was overkill, leading us to consider circular vibratory screening for scalping of bed ash in addition to fly ash," said Kowalski.

Each screener uses two, externally mounted, imbalanced-weight gyratory motors which provide multi-plane inertial vibration that causes on-size particles to pass through apertures in the screen while oversize particles travel across the screen surface in controlled pathways to a discharge spout at the periphery. On-size material passes through the screen at a rate of 50 lb/min (23 kg/min) to the bottom outlet directly below the inlet into the mix tank below. With the bottom outlet located directly below the top inlet, material falls vertically through the screen at high rates, permitting the screeners to keep up with the volumes of bed and fly ash the JEA plant processes daily.

Today the two bed-ash and fly-ash lines are equipped with four high flow rate circular screeners replacing the square shaker screens and crushers. The circular screeners have enabled JEA to meet its goal of reducing maintenance on the bed-ash line and reducing screener maintenance by virtue of their epoxy-coated, stainless-steel, corrosion-resistant construction.

"The 48 in. (1219 mm) diameter screeners met the criteria we needed to rationalize switching technologies," Kowalski said. "First, the circular screener is about one-tenth the cost of a double-roll crusher. This cost reduction alone would have justified the change, but there were other benefits as well. The new unit was small, which meant that we could install it easily and have it up and running quickly. Moreover, the small footprint of the unit would open up the work area and provide easier access for personnel and greater freedom of movement when maintenance needs to be done. There has been no maintenance requirement in the months since these units were installed, but when any maintenance is required it can be accomplished in minutes instead of hours. All we have to do is remove the single screen and insert a replacement. Rapid maintenance is important, because we run the screeners 24/7."

Kowalski reports that the new screeners allow removal of oversized material continuously. The "overs" build up in a special tank, and at one-to-two-week intervals, are transferred by truck from the tank to a settling pond. "The use of circular screeners instead of crushers has proven successful for us," Kowalski said, "and they are performing well in both our fly- and bed-ash processing areas." 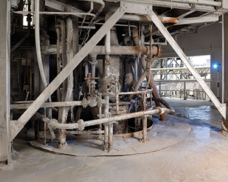 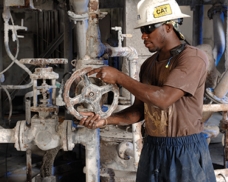 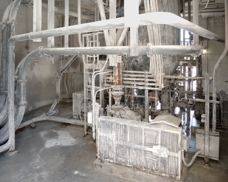 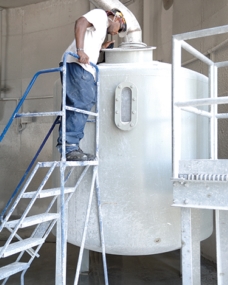 Oversize material discharged from the screeners goes into receiving tank.