CHURCHSTOKE, WALES—Standing on the bank of a spring-fed pond in a green, wooded valley, the Bacheldre Watermill produces flour as it has off and on since 1575, grinding the wheat between traditional millstones and separating bran from the flour in a water-powered wooden screener, called a dresser.

Recently, though, the Bacheldre mill has made two concessions to modern technology. At the end of 2004, the milling operation was disconnected from the old waterwheel and the two sets of French burr stones are now turned by a 50-hp electric motor. More recently, one of the mill's two dressers was replaced by an electrically driven centrifugal sifter made by Kason Corporation, Millburn, NJ. Called a CENTRI-SIFTER™ sifter, the machine has roughly 10 times the capacity of the two dressers combined and has proved to be more reliable, says Matt Scott, owner of the mill.

Bacheldre Watermill is a relatively small operation, but it has become famous for its high-quality flour since Scott bought it four years ago. The mill produces a dozen varieties of flour, most of them organic, for which it has won a number of awards. Last year, the mill won the (U.K.) Soil Association's award for best organic flour. Scott has also increased production to 10 m.t./week, from 200-300 kilos/week (440-660 lb) when he took over. In November 2005, he came in third in a U.K. competition for the best new business started up in the previous three years.

"Our grists are milled using traditional grinding stones to produce slowly and gently milled flour, which retains all the natural goodness of the wheat germ," says Scott. This time-honored process only slightly warms the flour, he says, thus leaving all the natural flavors intact.

Modern mills, he points out, use steel rollers to crush grain after it has been conditioned in water to avoid excessive heat buildup. Even so, he says, the heat can damage the wheat germ, so many companies remove it.

In Bacheldre's operation, grain is received in tanker trucks and bulk-blown into four silos, from which it is augered into a hopper in the mill. From the hopper, the grain is gravity-fed onto a scouring and separating screener that separates chaff from the grain. The machine, built in 1876 and now electrically powered, has two sloping, vibrating screens, located one above the other. Chaff is retained by the upper screen, which has a 5-mil mesh. Grain is collected on the lower, 2.5-mil screen, while fines fall through the screen.

The grain falls down the inclined screen onto a channel, which directs it into an open, rotating drum that has baffles and a wall perforated by holes of about 1 cm dia (0.34 in. dia). A fan removes residual dust and the grain falls through the perforations into an auger, which feeds a hopper above the millstones.

Bacheldre has two sets of millstones, as noted. Each consists of two flat, circular stones, located one on top of the other. The upper one, called a runner stone, rotates (hence its name), and the bottom one (the bedder) is fixed. Grain is fed from the hopper, through a hole in the center of the upper stone, and is ground into flour between the stones. The flow from the hopper is controlled by a mechanical device attached to the mill's drive shaft that beats against a loose-fitting shoe at the hopper's outlet. The ground flour emerges around the periphery of the millstones, where it is gathered up by a paddle attached to the runner and drops through a hole, either into a sack or into a vacuum system that takes it to storage.

The tiny gap between the stones has to be adjusted for the type of flour that is required—it is narrower for fine, white flour than it is for coarse, brown flour. However, the narrower the gap the less grain can be fed to the mill, so the flow from the hopper must be matched to the milling requirement. Both needs are met by a tentering screw that raises or lowers the runner and simultaneously raises or lowers the shoe at the bottom of the hopper to adjust the flow.

Most of the dozen or so types of flour made by Bacheldre are bagged directly from the milling operation into sacks ranging from 1.5 to 25 kilos (3.3-55 lb). However, white, durum and brown flours require further processing to remove bran, so they are moved by vacuum to hoppers that feed the bran-separation operation. Before being bagged for shipment, white flour is sieved to remove all the bran (40% of the flour). Half the bran is removed from the durum flour, and about 20% of the bran from brown flour.

The mill was using two old, water-powered wooden dressers to separate the bran, but (as noted) one of those units has been replaced by the Kason machine, a Model KO CENTRI-SIFTER sifter. It is driven by a 2-hp motor and can process up to 700 kilos/h (1,540 lb/h) of flour. In contrast, the old dressers can each process only about 400 kilos/day (880 lb/day) in winter and 150 kilos/day (330 lb/day) in summer, when there is less water available. The capacity of each mill is 150-200 kilos/h (330-440 lb/h), depending on the type of flour produced.

The CENTRI-SIFTER sifter is a compact centrifugal machine with a cylindrical sifting chamber that houses a cylindrical screen of nylon mesh. Flour is fed pneumatically into a vertical feed inlet at one end of the unit, then redirected by a feed screw into the chamber, which is in the horizontal plane.

Rotating helical paddles within the chamber continuously throw the flour against the screen, while the resultant, centrifugal force on the particles accelerates them through the openings. The rotating paddles, which never make contact with the screen, also serve to break up soft agglomerates. The separated flour falls down through a spout and is transported by vacuum to a bagging hopper. Oversized particles (bran) continue through the chamber and are ejected via a discharge spout into a sack and shipped for animal feed.

The Bacheldre mill uses two sizes of nylon screens: of 250 micron for white flour, and 550 micron for durum and brown flours. Screens are available for the CENTRI-SIFTER sifter in various other materials, including other types of monofilament cloth, woven wire in selected metals, perforated plate and wedge wire. Scott chose nylon because "we tried it and it worked well," says Scott.

In the mill, the new sifter is located next to the remaining water-powered wooden dresser, which is still used for white and durum flours. The dresser is housed in a rectangular wooden box and operates on a similar principle to the CENTRI-SIFTER sifter. A rotating shaft, powered by a water wheel via a pulley, runs the length of the box's interior. The shaft is equipped with brushes and is surrounded by a cylindrical sieve of stainless steel.

Flour is blown pneumatically through an inlet in the top of the box at one end and passes along the interior of the sieve. As it flows along the cylinder, the flour is pushed through the sieve by the rotating brushes and drops into a bag. Bran passes to the far end of the sieve, where larger holes allow the bran to pass through for bagging.

Besides having a much higher throughput than the water-powered machine, the CENTRI-SIFTER sifter is more reliable and does a better job of separating bran from flour, says Scott. "The old machines broke down about every couple of months and it typically took a day to take a machine apart and fix it. Also, we get a cleaner separation, and it only takes about 15 minutes to change a screen."

Miller Matt Scott pictured with the Kason CENTRI-SIFTER centrifugal sifter on the left and the old, water-powered dresser on the right.

A view of the mill's main shaft, with its crown wheel, on the middle floor at the Bacheldre Watermill. The millstones, encased in wooden housings, are on either side of the shaft. 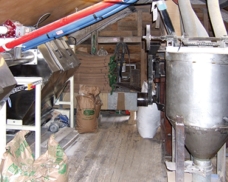 In this busy room at the Bacheldre mill, augers convey grain to the receiving hopper at right. At left are bins where flour is stored before it is packaged for shipment.