Equity Silver Mines Ltd., Houston, British Columbia, first began production in September 1980. In 1984, a feasibility study showed that additional gold and silver could be economically recovered through cyanide leaching of the flotation tailings.

Although the carbon-in-pulp or carbon-in-leach CIL process is commonly used for extracting precious metals from slurries, the use of circular vibrating screens, and VIBROSCREENS in particular, for the carbon circuit is an innovation that cuts costs.

Rectangular vibrating screens have been the conventional separation mechanism of choice across North America. In contrast, the use of VIBROSCREENS has been proven to be less costly for the initial purchase and to install. Also these circular vibrating screens require less power and less space. A description of Equity Silver Mines' process show how these screens have been successfully integrated in the system.

A 7.9-ft-dia by 12.1-ft-Iong trommel screen removes trash from the slurry. A pump moves the slurry to the leach circuit which consists of five 38.7-ft-dia and 41.3-ft-deep leach tanks. Four of them contain activated carbon. Sodium cyanide is added to leach the gold and silver. The bulk of the sodium cyanide is added to the first and third tanks. Activated carbon is present in all but the first tank to adsorb the dissolved gold and silver. The slurry in each tank flows through submerged E.P.A.C. screens and moves by gravity to the next tank in the series. The tailing slurry is then screened on a long trommel screen to ensure that no carbon is lost due to holed submerged screens. Next, it is pumped to a 38.7-ft-dia by 20.7-ft-high agitated tank for cyanide destruction, using sulphur dioxide and air. The tailings from cyanide destruction are pumped to a tailings pond.

The activated carbon granules, which are larger than the tailings particles, cannot pass through the submerged screens in the CIL tanks and therefore do not flow through the tanks. Pumps move the loaded carbon and some slurry countercurrent to the slurry flow. The carbon loaded with gold and silver is pumped from the #2 CIL tank to a rectangular vibrating screen. It separates the carbon from the slurry; the slurry returns to the CIL tanks while the loaded carbon goes into a measuring tank.

The loaded carbon from the measuring tank is pumped to the strip tank. In this pressure vessel, gold and silver are removed from the carbon by a weak sodium hydroxide solution at approximately 300°F. Gold and silver are precipitated with zinc dust in the traditional manner, and then collected with a filter press. Stripped carbon is washed with nitric acid to remove unwanted surface residues that reduce its capacity to absorb precious metals.

After the stripped carbon is washed with nitric acid, pH 1.0, to remove lime and base-metal buildup, thermal reactivation is performed at 111° F. to remove organic reagents. The reactivated carbon is then pumped to leach tank # 5. New make-up carbon is added as required.

The carbon that carries the gold is manufactured from burnt coconut shells. Recessed impeller pumps or eductors move all of the carbon in the plant as carbon in water slurry. Three 48 in. diameter VIBROSCREENS dewater the carbon, and the water is decanted to remove carbon fines. Water is then recycled back to the eductor water tank. With this closed circuit eductor water system, the plant is essentially self-sufficient on water.

The VIBROSCREENS have performed well and required no more than routine maintenance since start-up in 1985. The VIBROSCREENS operate efficiently because a only a 1-hp motor provides all the power that is needed to vibrate the screens. The strip circuit handles up to 165 st of carbon per month, creating a big job for the screens.

Borax, silica, and niter serve as fluxing agents. The flux and precipitate are charged into an induction furnace and buttons are poured. Buttons from the first pour are melted in a smaller induction furnace to be poured into 1,000 ounce bars. 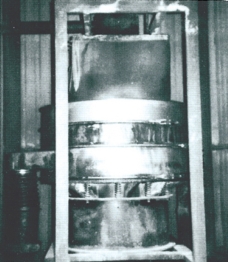 Side view of one of the three VIBROSCREEN® Circular Vibratory Separators used at Equity Silver Mines Ltd., Houston, British Columbia. The 48 inch diameter separators dewater the carbon that is used in the cyanidation process. 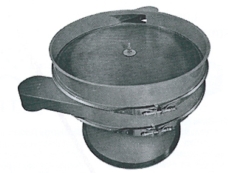 Carbon dewatering and washing would be in this area typically. VIBROSCREEN Circular Screen Separators have proven effective for this operation.

Typical Flow Patterns of solids distribution on the screen from a central feed. The screening pattern is controlled by a altering the relative angle of bottom eccentric to the top eccentric.