Kearns, UT—The Church of Jesus Christ of Latter-Day Saints established the Deseret Pasta Plant in the 1960s to produce dried pasta for relief and humanitarian efforts. The plant increased production capacity with the purchase of used processing equipment in 1975. Over the years antiquated equipment has gradually been replaced, beginning with two new Buhler presses and dryers in 1980.

"As we began the most recent process upgrades, we discovered we needed better refinement of our feed," says Glade Thompson, Director of Maintenance at the Deseret plant, "so we decided to replace the pre-war vintage gyratory sifter." The old sifter had been modified and repaired so many times that no clues remained as to its origins.

After investigating both gyratory and vibrating screen sifters, Thompson opted for a 48 in. (122 cm) diameter Kason VIBROSCREEN® circular vibratory screener that uses multi-plane, inertial vibration to separate byproducts and large particles from the feed to the pasta presses.

The vibratory sifter is an in-line unit containing one or more circular screens of specified sizes. Feed drops by gravity into the center of the top screen and an imbalanced weight motor on the bottom of the unit rotates to produce both horizontal and vertical vibration. The feed either passes through the screen or travels across it in controlled pathways to exit at the side. A gyratory sifter may use square, rectangular or horizontal screens in a stacked deck. The drive produces a horizontal circular motion to stratify the feed. With no vertical motion, long particles remain flat on the screen and do not pass through.

Feed to the Deseret pasta process consists of fresh durum granular plus a small amount (1-4%) of regrind-recycled pasta ground in a hammer mill to the proper size and mixed into the feed. Fresh feed is pneumatically conveyed in a 2-1/2 in. (6.4 cm) pressurized line from two 60,000 lb (27,216 kg) fresh silos through a dust collector and rotary airlock valve into the feed hopper. Regrind is mechanically conveyed via a 4 in. (10.2 cm) diameter auger conveyor to the feed hopper. The mixture is then metered through a rotary airlock valve into the vibratory sifter at a rate of 1,800-2,000 lb/hr (816-907 kg/hr) on a continuous basis.

Sifted feed exits the screener through another rotary airlock and is pneumatically conveyed in a 2 in. (5.1 cm) line under pressure to two 1,500 lb (680 kg) mixer storage tanks. From there it feeds both the short- and long-goods pasta production lines, where it is mixed with water to make dough, extruded into pasta, cut to the proper size, and dried. Material screened from the feed exits the screener's discharge spout into a box and is manually recycled into the feed hopper.

Although the plant is relatively small compared to large commercial pasta producers, each line has a capacity of 650 lb/hr (295 kg/hr) and total plant output exceeds 2 million lbs (910,000 kg) of pasta annually.

Consistency of the feed particle size is critical for quality pasta production, with a coarse grind producing the best pasta. Durum wheat is used because it is the firmest wheat and when milled produces a very granular product with a minimum of fines. The durum granular used at the Deseret plant has a particle size distribution range of #100-#30 mesh US sieve (0.0059-0.0234 in. or 150-595 microns). It is fairly consistent in particle size, but irregular in shape, with some particles that are oblong, broken, or geometric. The material passed through the old gyrating sifter so quickly that a portion of the irregularly shaped on-size particles were being discharged along with oversize particles, requiring rescreening of the rejected material.

Thompson says he was looking for a sifter with more capacity and more opportunity for the product to contact the screen, plus the ability to control the flow. He chose the VIBROSCREEN sifter over other types because the feed residence time can be easily adjusted by removing or adding weight plates on the imbalanced counterweight system on the gyratory motor mounted below the unit. Greater residence time allows more usable product to pass through the sifter, decreases waste, and saves time and labor in recycling. Thompson estimates the savings at about 0.5% of the feed.

The vibratory sifter requires just one screen of #35 mesh (0.179in or 150 microns) to scalp any large particles or foreign objects in the flour. An even more consistent particle size could be achieved by installing additional screens. Although it is not currently a problem, if in the future feed quality changes and there are too many fines, it is possible to add another screen to separate them.

Space considerations were another reason for choosing the circular vibratory screener. It just fit into the available space with engineers making some alterations to get it into place. According to Thompson, a gyratory sifter of the same capacity would have required 3-4 in. (8-10 cm) greater circumference because of its motion during operation. The configuration of the sifter, with its input straight down in the center of the unit, also helped it fit into the space.

Finally, Thompson noted that the VIBROSCREEN sifter has improved sanitary conditions in the plant, with much less leakage than with the gyratory sifter.

The Church of Jesus Christ of Latter Day Saints seeks to abate suffering everywhere, among any people. Relief efforts include feeding the hungry worldwide, and the operation of its own food production and processing plants has enabled the Church to expand emergency response for famine victims and disasters such as the tsunami in Southeast Asia and Hurricanes Katrina and Rita on the U.S. Gulf Coast.

A 48 in. (122 cm) circular vibratory screener sifts up to 2,000lb/hr (907kg/hr) of durum granular flour. Auger conveyor transports a small amount of recycled, ground pasta to the feed hopper.

Dried pasta and other food products are shipped worldwide for hunger relief. 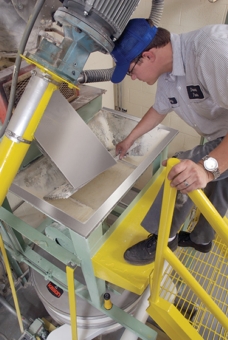