Vibratory Screener Solves a Water-Recycling Problem for a Wholesale Greenhouse

DETOUR, MD—The recycle of process water is now an integral part of many company operations, due to the rising cost and increasing scarcity of water in many parts of the world. In many cases an important feature of the recycling system is that it does an efficient job of cleaning up the water in order to avoid contamination problems.

Catoctin Mountain Growers, a wholesale greenhouse that recycles up to 500,000 gal/d (1.9 million liters/day), had such a contamination problem. Catoctin produces 600,000-700,000 chrysanthemum and 200,000 poinsettia plants annually, plus a variety of bedding plants, which it sells to such major box stores as Wal-Mart and Sam's Club. The company raises this huge quantity of plants in a 9-acre (36,425 m2) greenhouse and three acres (12,140 m2) of outdoor space.

The company was using a cascading filter (a sloped screen) to remove this material, but it did not work well, says Robert VanWingerden, the owner of Catoctin. "It was a pretty fine screen, but it let debris fall into the tank and this became a source of disease that caused problems with the flowers."

VanWingerden had the filter replaced by an electrically driven circular vibratory screener that has solved the problem, he says. The Flo-Thru VIBROSCREEN® separator, made by Kason Corp., uses a 72 in. (183 cm) diameter vibrating screen to remove debris before the water goes into the tank. "It does a good job—the water is clean," says VanWingerden.

For about 8 hours a day, Catoctin cycles water from storage, through the greenhouse, and back through the vibratory screener. The company does not discharge water to the sewer and supplies water from a well or a pond to make up what is used by the plants. Make-up water accounts for about 10% of the volume.

Catoctin has enough storage to fill two bays and part of a third at one time, so the usual situation is that the first bay in the sequence is being drained while the second is full and the third is being filled. Valves control the flow in and out of each bay. Water is retained in a bay for a few minutes, then is drained to one of two 2,000-gal (7,570-liter) sump tanks. From there, the water is pumped up to the Flo-Thru VIBROSCREEN® separator, mounted atop the main storage tank, which is about 10 ft (3.05 meters) tall. Water recycled through the tank is retained in two 30,000-gal (113,550-liter) tanks, for a total storage capacity of 70,000 gal (265,000 liters).

The volume of water recycled ranges up to 500,000 gal/d, as noted, but can be as low as zero, and an individual bay may be flooded once a day or only once every few days. "It all depends on the type of crop, the size of the flowers and the ambient temperature," says VanWingerden. The entire operation is computer-controlled.

Catoctin's separator has a single screen deck of 145 mesh TBC, with a 16-mesh TBC backing screen for reinforcement. The stainless-steeI screen is supported on a stainless-steel frame that has radial arms for structural strength. The machine is powered by two unbalanced-weight gyratory motors, each of 0.75 hp (5.6-kW), mounted opposite each other on the unit's exterior wall. Wastewater is fed onto the middle of the screen and the vibratory motion imparted by the motors causes oversized particles to migrate to the periphery, from where they are removed through a discharge spout. Water falls directly through the screen and through a funnel into the main tank.

The side-mounted motors differentiate the Flo-Thru machine from Kason's standard VIBROSCREEN separators, which have a single gyratory motor mounted under the screening chamber. The advantage of the Flo-Thru design is that the bottom outlet can be located directly below the inlet, thus allowing a much higher flowrate. This was important for Catoctin's needs, says Kason representative Christopher Dugan, of Separator Technology Co., Browns Mills, NJ, who installed the machine.

Another feature of the Flo-Thru separator is that it has a much lower profile, since the motors are side-mounted. This, too, was important for Catoctin, because of the limited space between the top of the tank and the ceiling. The separator, which is only 47 in. (120 cm) tall, fits into the restricted space with little room to spare.

Prior to installing the Kason machine, VanWingerden considered a textile cloth filter, in which water is pumped over a section of cloth that is pulled from a large spool. Periodically, a clean length of cloth is pulled off the roll. VanWingerden opted for the Flo-Thru machine with a stainless steel screen because "I liked how it took the debris off and you don't have to keep putting in new cloth."

On the other hand, silt left on the Kason machine's screen at the end of the day dries overnight and slowly builds up over time, he says. "Material would not build up if we operated 24 hours a day, but the screen is relatively easy to remove, so we take it out about once a month to flush it with water. 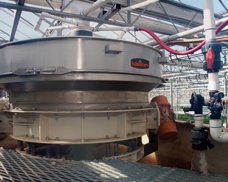 The 72 in. (183 cm) diameter Kason Flo-Thru VIBROSCREEN® separator screens up to 500,000 gallons (1.9 million liters) of water per day. Side-mounted motors reduce height of the screener, allowing it to fit between the ceiling and top of the storage tank.

Oversize particles migrate to the periphery of the screen where they exit through a discharge spout.

Greenhouse water flows through the screener into a 10,000 gallon (37,850-liter) main storage tank while debris falls into a tote.